Look at this place! Cute, huh? It’s called 24 Diner, and it’s fairly new and humming along quite happily next to Waterloo Records on Sixth and Lamar. I have been there twice (two times! (I’m trying to work an Arrested Development reference in whenever possible)) and I wanted to share it with you, dear reader.  It’s a bright and cheery little diner that, I promise, has something for everybody.  Read on!

These are Sparkies ($6.85): super-liquidy-cheese-filled jalapenos, wrapped in sausage, breaded and deep fried.  These sounded super terrific to me, lover of trashy sausage snacks.  In reality, we thought they were only ok.  The cheese was so thin that it simply ran out of its sausage sarcophagus the instant you bit into it.   For my money, you’re better off with the Swiss Chard and Artichoke Gratin as a starter.  This was pretty tasty, and the chard (along with much of the other produce on the menu) is sourced from farms around Austin.

Helen, as per her usual, ordered the Veggie Burger ($10.95).  The patty was made with beets (which lent their lovely hue!), mushrooms, lentils, rice, pumpkin seeds and golden flaxseeds and it came with lovely toppings.  Helen is quite the veggie burger connoisseur- she’s sampled them at almost every place in Austin that offers them.  Her verdict? She liked it quite a bit! She thought the beets were a fun and unusual twist. But Helen still contends that P. Terry’s makes Austin’s best veggie burger. 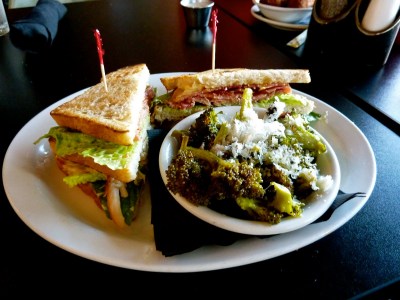 That ever-intrepid bacon advocate Molly Blake ordered the R.J. Club ($11.95) with a side of roasted broccoli (one of the special sides of the day).  This was a good, if fairly standard, version of this sandwich.  Crispy bacon, turkey, with a little country ham thrown in for good measure.  The roasted broccoli (a concept to which I have confessed my undying love) was nice, but would have benefited from a squeeze of lemon- it was a touch drab.

I ordered the Pulled Chicken Breast Sandwich with fries ($9.95).  Nice lunch fare! The sandwich was really rather lovely, due largely to the roasted tomato vinaigrette, and the fries were great.  I don’t know if anyone reading this remembers what the fries at Railroad BBQ in Manchaca, TX taste like, but these remind me of crunchier versions of those.  I think the similarity lies in the very potato-y taste they were able to preserve.  My only complaint about the sandwich was that it became a bit monotonous after awhile- I got tired of eating the same flavors after half of the sandwich and had no desire to press on.

Talk about ending on a high note! Huzzah! Well aside from that somber tone at the end, I’m really happy 24 Diner opened its doors.  It’s the kind of place where you can bring a diverse group of people anytime of the day or night, and everyone will be able to find something they like.  Also, if you’re there for breakfast (or feeling breakfast-y when you’re there- they serve it all day), they do it up right.  When I was there with Andy, he ordered a big breakfast plate and loved it.  Their waffles are really fun and boozy too (bourbon?).  Check it out!