Happy Sunday, dear readers! I’ve been a negligent blogger lately, but I have a bit of an excuse- I spent all last week in Dallas, for work.  Oh boy.  I had grand schemes of blogging about where we ate every night after we returned to our hotel, but Law and Order on TNT, Another Cinderella Story (judge me if you must! but it had Sue Sylvester in it, so I had to watch the whole terrible thing, didn’t I?), and the omission of my camera cord kept me from it.

But better late than never, aye? I received the most fantastic list of restaurant recommendations from my friends The Internet Cooking Princess and Allison. We didn’t get to most of them, but I’ve got more trips scheduled to Dallas this summer, so I’m going to keep working my way through those lists!

Here are pics of some of the places we ate (I forgot to bring my camera along a few times): 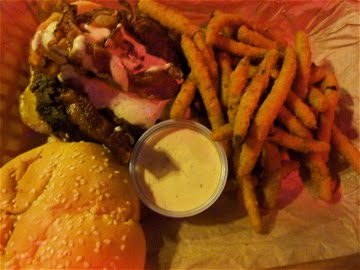 Our first night in, we tried to eat at Cowboy Chow but it was closed.  Happily, the Twisted Root was on the same block, so we stopped in there instead.  I think this place is hovering in the neighborhood of #16 on the Texas Monthly list of the best burgers in Texas, and I can totally understand why.  I had the Peppercorn Ranch and Bacon Burger with a side of Fried Green Beans (when in Dallas, afterall!).  The burger was fantastic- I heard that they grind up brisket in their burgers, but whatever they do, it was juicy beefy fun.  The fried green beans mostly tasted like onion rings to me, but hey! i like onion rings!

These pics are from my dinner at Rathbun’s Blue Plate Kitchen.  Kent Rathbun defeated Bobby Flay in an Iron Chef America battle, so I was happy to support his restaurant (good ole Bobby has some tasty looking dishes, but his behavior in his battle against my beloved Morimoto makes me think he’s a bit of a, um, tool box, as we say). Anyway, I had bacon-braised brussel sprouts and grilled asparagus, which were ok, and a fried green tomato app with chevre and honey that was spectacular. 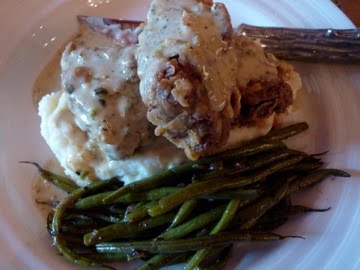 My very favorite dinner of the week was from Tillman’s Roadhouse.  ICP said this is the place she tells all Dallas visitors to try, and I can totally understand why.  First off, it’s in a perfectly delightful little area called Oak Cliff that’s full of happy little restaurants and boutique shops.  A nice change from the more chain-y areas we’d been in.  Tillman’s itself is a dream.  For the ladies: it really reminded me of what Anthropologie might look like if they decided to adopt a kitschy hunting theme.  So adorable.  As you can see from the pics above, I ate myself silly.  Delicious truffled popcorn and warm peanuts.  A trio of three types of french fries (I liked the purple peruvian fries with homemade chile powder the best!).  A chicken-fried hanger steak with poblano cream gravy! And to cap it off, a cookie tower with chocolate chip cookies, still deliciously gooey in the center, glued together with chocolate fudge on top of banana ice cream on top of a warm peanut butter cookie.  We had a happy time 🙂

Our culinary tour continued at Monica’s Aca y Alla, a Tex-Mex place owned by a local celebrity tranny!  We had to go. Rumor has it that this place has 75 cent margaritas on Wednesdays, but we went on a Thursday.  Even so, this place is cheap! I had a margarita for $3.50 and the Frankie’s Combo (shown above) for only $4.50 because this place keeps happy hour prices all night long on Thursdays.  Good times.

Our last meal in Dallas necessitates that I not end this post on a high-note.  We had to high-tail it to the airport, and so we were on the lookout for a place where we could stop and eat lunch quickly.  We were nearly there and hadn’t seen anything, so I proposed that we stop at the very next place we came across.  As we rounded the corner we saw a Popeyes.  Nope. Nope.  We abandoned the game and opted instead to stop at the nearby Grandpa Tony’s Mexican.  Sounds promising, no? haha!

We were in a hurry, so as I read the menu, I thought that the bean, queso, and guacamole chalupas sounded pretty good.  Here’s what came out:

Three chalupas.  One bean. One queso.  One guacamole.  And I think, technically, that I should have put quotation marks around the words queso and guacamole in the preceding sentences. Why would one choose to deconstruct chalupas in this manner? Well, poorly-made chalupas aside, I had fun exploring the restaurants in Dallas! It made the 40 hour training on educational data disaggregation software just a little more enjoyable 🙂