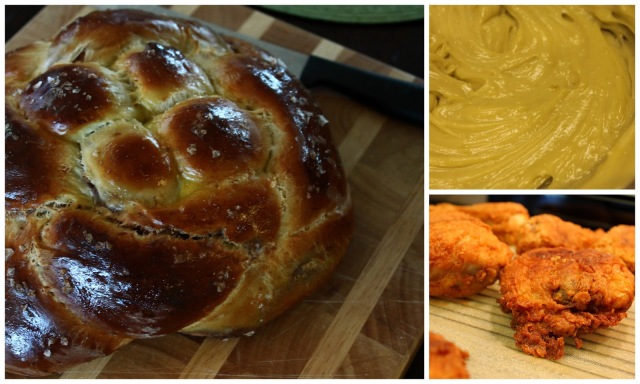 Have you read Tamar Adler’s An Everlasting Meal? It is an inspirational book, to be sure, and is one that has given me countless ideas for how to use up the “ends” of meals and ingredients to minimize waste and maximize thrift in the kitchen, like a leftover pasta frittata, chard stem and broccoli stalk pesto, and the most delicious kale gratin of all time. But that book also planted the seed of my greatest food fear: homemade, whisk-only mayonnaise. Adler’s prose is absolutely beautiful, and florid, and sort of mesmerizing.  It makes you feel like you can and will duplicate every recipe she describes in her book.  The section on the joys of homemade mayonnaise, made exclusively with good olive oil, was no exception.  I have made mayonnaise successfully in a blender, no problem, using canola oil. When you try to do the same thing with olive oil, though, the mayonnaise comes out noticeably bitter.  Adler describes the bitter olive oil phenomenon scientifically, which I can’t replicate here, but essentially says that any time olive oil is processed with a mechanical blade (blender, food processor, immersion blender) it turns bitter.  So an olive oil mayonnaise, the very best kind of homemade mayonnaise, must be done by hand.

Armed with her beautiful description of the process, farm eggs, and two cups of olive oil, I set about trying to make it.  You’re supposed to add the oil in the tiniest drops imaginable, and almost excruciatingly slowly, whisking like a maniac all the while to build an emulsion between oil and egg.  Well friends, it didn’t go well.  I rushed the oil, lost arm strength far to quickly, and my mayonnaise never came together.  You can try to save the mayo twice, by starting over with a fresh egg and whisking in your failure-sauce anew.  I failed both times, my arm getting weaker and weaker as I went. I finally ended up adding the egg and olive oil mixture to a pot of freshly cooked pasta in an extravagantly rich attempt to not have all those lovely ingredients go to waste, but I was brokenhearted about the whole thing and determined never to waste olive oil in the attempt at homemade mayonnaise again.

Enter Abbie. Abbie is my friend and food hero, a passionate and tireless cook who is always coming up with new and wonderful recipes. A few months ago she emailed me and a few other local food52ers with a brilliant idea: let’s have a meet-up to cook the things that scare us.  Obviously, I didn’t have to do much soul-searching to come up with my contribution to this get-together.  Abbie copped to being scared of souffles and fried chicken, our friend Molly mentioned challah, and I agreed to take another stab at that damn mayonnaise.

We tackled Molly’s challah first.  And oh man, did Molly pick a doozy of a recipe for her first attempt at her fear! This fig, olive oil, and sea salt challah has a homemade fig jam tucked into the ropes of bread dough, which are then braided together to make a gorgeous round loaf. Molly brought the freshly made dough and the fig jam, and she and Abbie set to work: 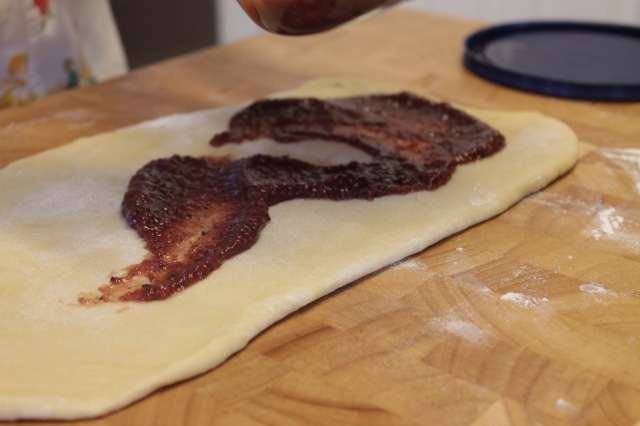 A lovely swish of a lovely jam.

We might have been a little heavy-handed with the jam, but Abbie and Molly just swiped the excess off with a spoon before pinching the rope of dough closed and stretching it as far as it would stretch. 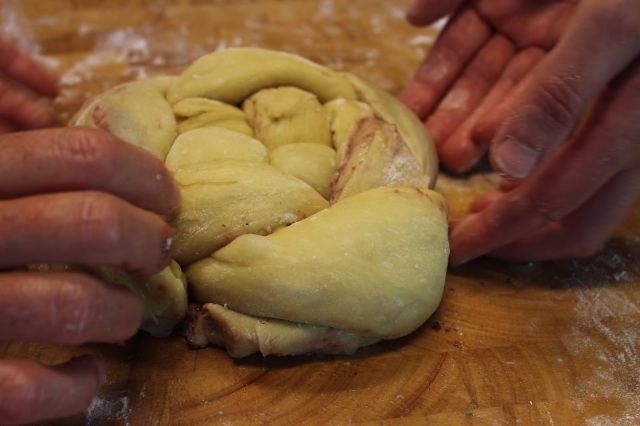 Tucking the rope ends in after a surprisingly simple weaving process.

I feel sorry for the accosted bread dough in this picture. Transferring to the parchment-lined baking sheet for an egg wash before the second rise.

The dough is brushed with egg again after the second rise, and then sprinkled with your flakiest sea salt.  The double egg wash is what gives you this gorgeous mahogany crust: 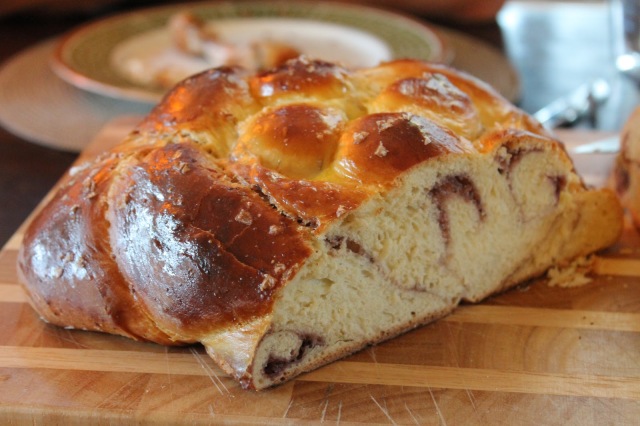 The taste was completely wonderful too! The salt on the outside was a fun, pretzel-y addition, the crumb of the bread was soft and supple, and the fig jam was lovely and not too sweet. Molly talked about trying her hand at an apple-butter filled variation, and Abbie envisioned a savory pumpkin-filled loaf for Thanksgiving.  These girls are rad.

Next, it was my turn to try the godforsaken mayonnaise.  Abbie poured in the olive oil while I whisked with all my gumption.  You can’t see the wires of the whisk in the picture above because I was a mayonnaise ninja! I channeled the force of Tamar Adler and gave that shit everything I had.

A million minutes later, we had done it!! I was beyond thrilled. And it tasted unbelievable too- velvety olive smoothness without a trace of bitterness. We mixed in a good amount with some turkey Abbie had roasted the night before (!?) along with diced apple, red onion, parsley, and lemon juice and ate our delicious turkey salad on bits of baguette. It was delightful. But is my fear conquered? I’d say yes, with the qualifier that I’m not scared so long as Abbie is there to pour the oil in for me.

Last up was the chicken, which (spoiler alert! because I neglected to take ANY process pictures) turned out fabulous. We used Michael Ruhlman’s genius recipe for Rosemary-Brined Buttermilk Fried Chicken. Abbie brined the chicken pieces before we got there, and together we breaded the chicken in a flour/spice/baking powder mixture, dipped it in buttermilk, and then dredged it a separate pan of the flour mixture. We fried half the pieces in Abbie’s giant cast iron skillet, which had been filled halfway up with peanut oil and heated over medium until bubbles formed around the bottom of a wooden spoon when you held it in the oil. The first four pieces looked pretty nice, but the crust wasn’t quite as shaggy as we might’ve liked.  I mentioned that my go-to fried chicken recipe (yeah, I’ve made it a lot

) has you mix the baking powder and an egg into the buttermilk, so that the mixture becomes thick and foamy, and helps more flour stick in the second dredging.  We tried this method with the second batch, and all agreed it was a bit better than the first, though both were totally delicious. That rosemary brine is a knockout too! The meat was succulent and herby, perfectly seasoned (even though there’s only 3 tablespoons of salt in the brine!), and just fantastic.

So, Cook What Scares You: Beige Edition was a smashing success! It was empowering to tackle my fear with the help of two accomplished cooks and I’m excited to do it again! Next time, Abbie’s gonna make me butcher a rabbit.

9 thoughts on “Cook What Scares You”