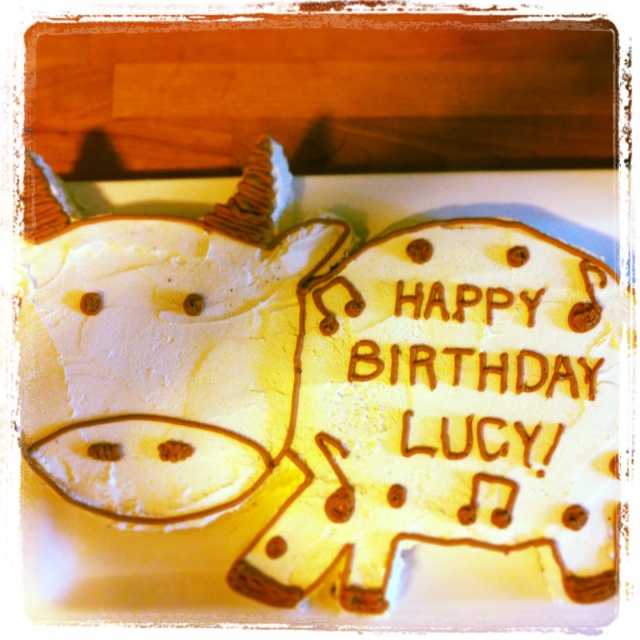 It’s always tricky figuring out how to start a blog post after ignoring this site for three months. But now I have recipes that I want to share and so I’m here. And I am sad that I’ve been away for so long again, but c’est la vie! Let’s press on as if we’ve been together all along! Also, I’m pregnant!
Anyhow! My dear and darling sister-in-law Joanna threw a tamalada for her sweet baby Lucy’s first birthday today.  Joanna and her family are gluten-free and dairy free, and so I offered to make the cake, because it would be well near impossible to make 400 tamales and a GF/DF cake in the same day. Oh, and the theme of the party, invented by Joanna’s older daughter, was Moo-sical, so I wanted to try to fit that theme if I could. So I researched.
My normal approach for gluten free baking is to use my favorite gluten-y recipes, and just substitute the very best gluten free flour blend in place of all purpose (and of course make sure everything else, like the cocoa powder, is GF). My favorite GF flours are Cup4Cup, which is awfully pricey and only available at Williams Sonoma (in Texas, anyway) and King Arthur’s multi-purpose GF flour, which you can get at Whole Foods. I have heard not so great things about Bob’s Red Mill GF flours and baking mixes, which rely on bean flours and end up making things taste bean-y. But this cake had to be dairy-free as well as GF, so my favorite butter/buttermilk-heavy yellow and chocolate cake recipes wouldn’t do. Searching for GF, DF recipes online is so tricky.  There aren’t many that look promising (to my mind at least), and those that do (like this recipe from Babycakes in NYC) require a ton of random flours and xanthan gum, which I had no idea where to buy.
And then I remembered a recipe from one of my food52 favorites, Oui Chef, for GF vegan chocolate cupcakes without any crazy ingredients. Huzzah! His recipe did call for garbanzo bean flour though, and I was worried that the cake might suffer from the same bean-y problem that plagues the Bob’s Red Mill stuff, so I subbed in the King Arthur GF flour in place of the two the recipe called for. All that remained was finding a good vegan frosting, and a quick search yielded this recipe for vegan fluffy buttercream frosting, which sounded promising. After reading the comments, I decided to start with half of the amount of sugar the recipe called for (many complained that it was too sweet) and taste from there. Half was plenty! I also omitted the soy milk, because the frosting had a nice consistency without it. Whew!
The verdict? I was pretty pleased with it! Yes, you can tell you’re not eating a standard gluten-y buttery cake.  It was very dark and chocolatey, and not as sweet as a normal cake (you use maple syrup instead of sugar). But it was moist, baked up beautifully, and had a texture resilient enough to allow me to carve it into the (approximate) shape of a cow. The frosting was sweet and simple and tasted a lot like the standard frosting you’d get with a grocery store birthday cake. But it paired nicely with the cake and I think the whole thing worked out pretty well. So, if you’ve been on the lookout for a gluten free and/or vegan celebration cake, I hope you’ll give this one a try!
Gluten Free Vegan Chocolate Cake
adapted slightly from Oui Chef, who in turn adapted it from Jennifer Katzinger’s “Flying Apron’s Gluten-Free and Vegan Baking Book”
Vegan Fluffy Buttercream Frosting
adapted from Vegan Cupcakes Take Over the World, by Isa Chandra Moskowitz and Terry Hope Romero via Chow