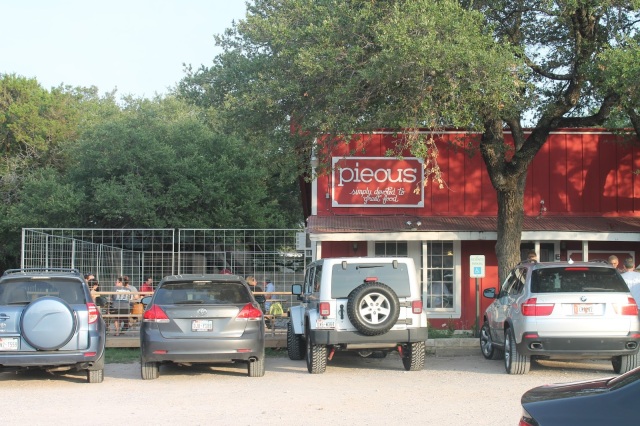 For years, the Natural Gardener was the first and last item on my list of places worth visiting in Oak Hill. Shitty traffic and shittier restaurants were items on my list of reasons to avoid it. But the tables seem to be turning there. It started a few years ago with Jack Allen’s Kitchen (from the chef behind Z’Tejas, and the father of the chef behind Barley Swine), which is a bit yuppie, yes, but has some really great offerings, including a fabulous burger. In recent months a few other restaurants have hitched their wagons to Oak Hill’s star: Your Mom’s Burger Bar has announced plans to open a second location there soon, the folks behind Curra’s have opened Senor Buddy’s, and most notably, Pieous opened there earlier this year.

Pieous sells fantastic wood-fired Neapolitan pizzas with lots of house made toppings (mozzarella, sausage, etc), slow-smoked pastrami, and enchanting desserts. We stopped by early on a Friday evening to check it out. Here’s how it went down! 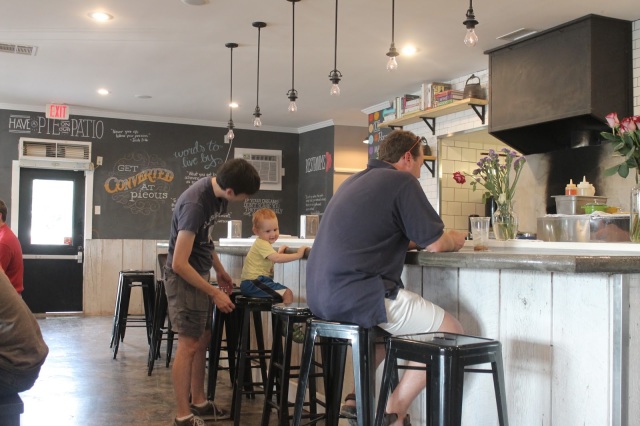 These fine fellows had a good time watching the pizzas fly in and out of the wood-burning oven (my two fellows on the left I mean. I don’t know the fellow on the right, but he probably enjoyed himself too). These pizzas crisp and blister in the fire in about a minute. 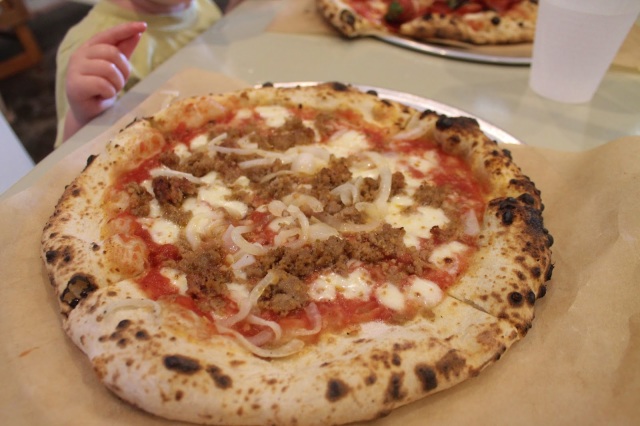 This is the Smoky Italian- crushed tomatoes, house made mozzarella, house smoked Italian sausage, and spicy onions on top of their lovely Neapolitan-style crust. I just loved it. The sausage was perfect- I loved the fine texture- and the spicy onions made it really special. The crust is made with a wise old sourdough starter (very cool), and has a great pillow-y chew. 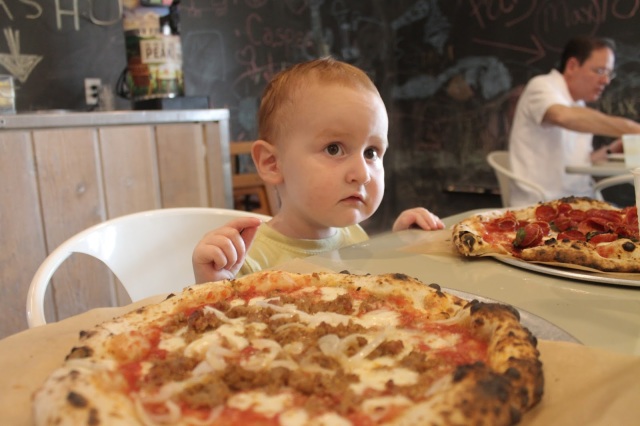 My darling boy! He devoted most of his time at the table to plucking bits of sausage from my pizza and putting them into the little pepperoni cups on Andy’s. He really really likes meat. [Side note- we went swimming at Deep Eddy today, and promised him lots of meat afterwards (we were going to go to La Barbecue). Well, he wore himself out at the pool and fell asleep as soon as we got in the car so we went home. As soon as we got him into bed he woke up devastated and kept repeating “EAT. LOTS. OF. MEAT?!” in his saddest, loudest voice. It was too late for La Barbecue (it’s getting a pretty sizable line these days!), so we went to Rudy’s- a gas station/BBQ shop joint which sounds horrifying but has its place in the world. Henry ate his weight in smoked sausage.]

My beloved surprised no one by choosing the pepperoni pizza. Really, though, this is the margarita pizza, with more of that house made mozzarella, topped with several fistfuls of a high-quality pepperoni. It was so great! Andy and I are huge fans of Neapolitan pies, and we both decided we liked these better than our longstanding favorite, House Pizzeria. 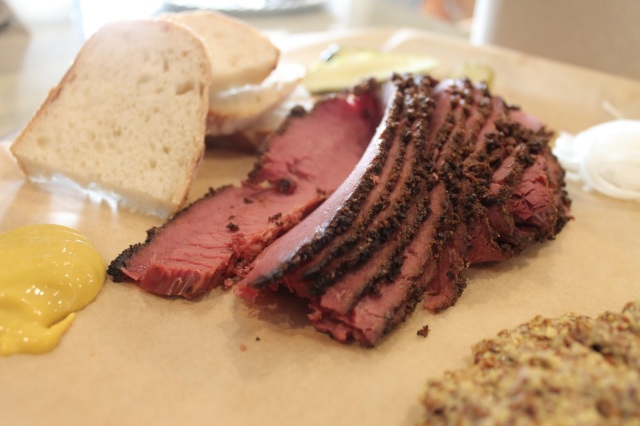 When the Pieous folks set up shop they inherited an old smoker from the previous tenants. They are putting it to good use by slow-smoking the most wonderful pastrami. I loved the pizza but I may have liked this even more- it’s moist, smoky, and peppery and what more could you want, really? They serve it with their house made sourdough bread, mustards, pickles, and onions. 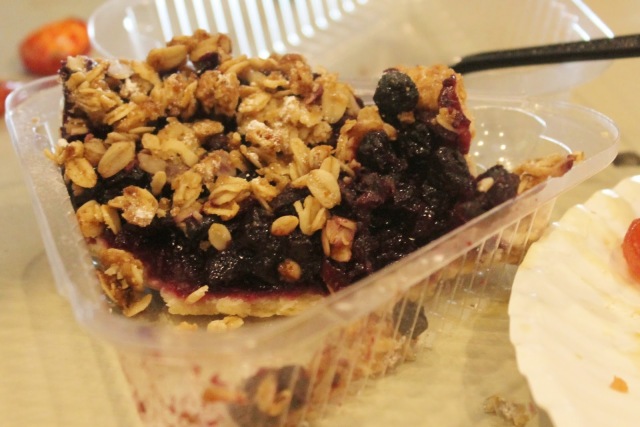 Please forgive my terrible photo of this half-eaten blueberry pie. I snapped it hurriedly so I could steal some more bites before Henry and Andy gobbled it up. My dear friend Raven brought me a slice of their banana cream pie a few weeks before we went, and that pie, like this one, was just classy as hell. They use a lighter touch with the sugar than most pie shops in Texas, and you can taste that everything is made from scratch. The blueberries are the small wild ones, with none of the goopy cornstarch-thickened sauce I’m used to in a blueberry pie. They’re topped with a simple oat streusel and the whole thing is just perfect. They also sell chocolate chip cookies that are bigger than your head and look fabulous, in case you needed a final push to check this place out.

We got there around 6:30 on a Friday, and there was already a sizable line. By the time we left the line was almost out the door. Consider going on a weeknight or earlier on a weekend or risk them selling out of pizza or pastrami, which I hear happens fairly often. It’s such a charming place- I hope you’ll check it out!