I’ve done some soul-searching about blogging lately. After a year of basically only posting gluten free pies, I was feeling adrift on where to go next. And I was still tied up with blogger, which sucks, and which I could only update on my computer, a near impossibility for me these days. I wasn’t sure I had a perspective to offer that wasn’t already covered, and better, by the million other food blogs out there. And the photography! Reclaimed farmhouse wooden tables swirled with precisely-spilled ingredients surrounding a plate of the blogger’s latest original recipe. I don’t have the time or energy or money or, frankly, the skill set to compete with that.

But! I love talking about food. I love sharing what I’m cooking with friends. I make a menu plan every week, and stick to it, and I work hard to keep it seasonal, and local, and limit the meat I use, and use up the ingredients I carefully add to my list. I think that there is value in this, and so here’s my plan. Every week, I’m going to post my menu for that week, along with simple photos of the finished dishes, right before they’re whisked off to the table. I’ll add a few notes about each one, whether we liked it or not, what changes I made and would recommend, and why I chose that recipe. My hope is that my blog will help give you a few new ideas for meals for your family. If you’re in Austin, you’ll have ideas for what to get from the farmers’ market that week, and what to do with it, if you’re so inclined. And I’ll have a journal of the food I feed my family every day, which I love. I switched to WordPress because I can write the posts while I’m in bed with my kids (they’re pressed up on either side of me right now!) which means I’ll be far more likely to update on time. And I went ahead and spent 13 bucks on a domain name to make it feel extra real and special.

I had the idea for this new series of posts in the middle of last week, so I don’t have a full week’s worth of meals to share in this post, but here are a few of the things I cooked last week, to give you an idea of the format I’ll be using. Thank you so much for stopping by!

Double Coconut Granola. This is the best granola I’ve tried. I’ve played around with the sugar amount (you can use far less) or added more brown sugar and less maple syrup, or used a good squeeze of honey instead, which I swear makes bigger clumps. One important change to this recipe though is that it always takes much longer to bake for me. I cook the granola at 325, stirring every 15 minutes or so, until it’s no longer moist in the middle, which can take up to an hour and a half.

Savory Bread Pudding with Kale and Sweet Potatoes. The original recipe called for mushrooms in place of the sweet potatoes, and I substituted them because I had cubed roasted sweet potatoes left over, but it wasn’t a great swap. They were just too sweet in this savory application. Also, be sure you use a stale or hearty whole grain loaf, otherwise the bread at the bottom is a bit too soggy. I liked this recipe a lot better sliced and reheated in a skillet with melted butter the next day- it was more like a savory french toast, with crispy buttery edges. 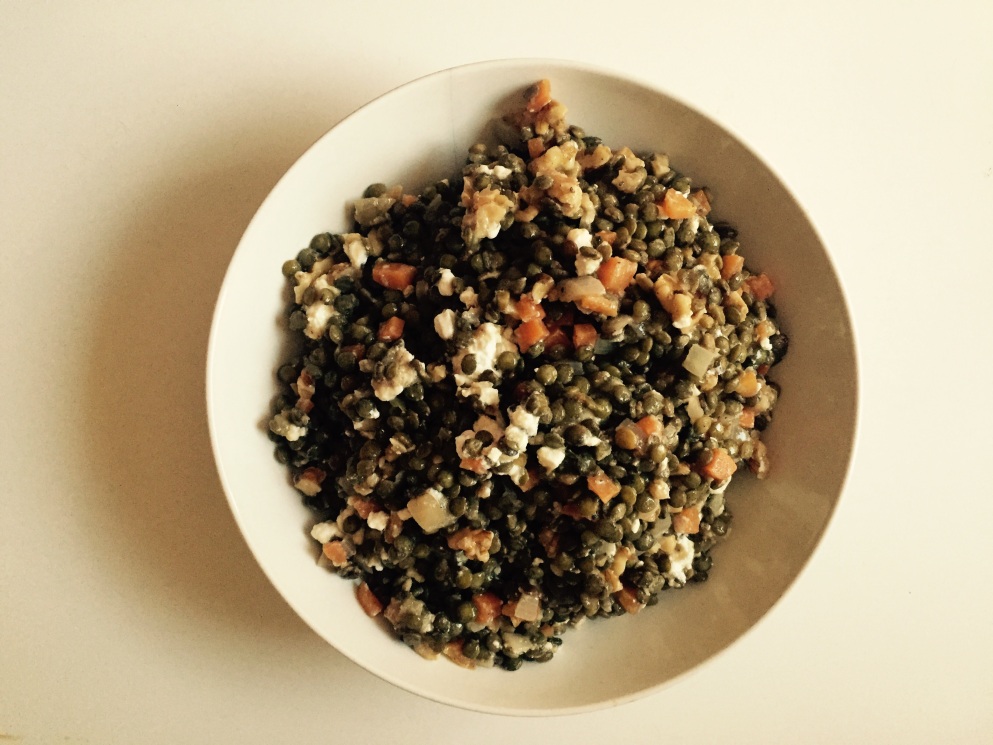 French Lentil Salad with Goat Cheese and Walnuts. I served this with the kale bread pudding and both Andy and I were surprised to find we liked it better than the main course. I didn’t have parsley, so omitted it, but this was great right after I made it and leftovers held up beautifully in the fridge too.

Quick and Easy Tamale Pie. I don’t know that this can really justify the title “quick and easy” but it was delicious, and vegetarian too. The brown butter cornbread on top is just perfect. A note that you’re supposed to bake this in a large cast iron skillet.  My largest is 10 inches and wasn’t big enough to hold everything- I had to scoop out about a cup and a half of the filling to make it work. This is a J. Kenji Lopez Alt recipe- you’ll see recipes from this guy come up a lot in my posts because he’s great at writing ones that come out well every time.

Root Vegetable Pies. These are filled with curried root vegetables, cilantro, and aged cheddar and are totally crowd-pleasingly amazing. I don’t have large muffin cups, so made 12 regular muffin-sized pies instead of the six larger ones. Even so, I had enough filling leftover to make another dozen, except I ran out of dough. I froze the filling to make another batch in a few weeks, but next time I’ll double the dough ingredients and make 24. You could also just make one big double crust pie if you don’t want the fussiness of making the mini ones. This is from Plenty More, a great vegetarian cookbook by Ottolenghi.

We had a few scraps of dough leftover from the root pies and so we rolled them out, cut circles with a cookie cutter, spooned in a teaspoon of strawberry jam and crimped the edges with a fork. I brushed the tops with egg wash and sprinkled them with sugar and baked them at 400 degrees for about 10-12 minutes, until they were crispy and the jam was oozy. Henry went wild for them.

Quesadillas with Sauerkraut. This has been my daily breakfast for the last month or so. I melt a tablespoon of butter in a skillet and crisp up two corn tortillas, each filled with grated cheddar cheese. When they’re crispy I sprinkle them with kosher salt and pry them open with a butter knife and add a forkful of sauerkraut. The kraut is sour and crispy and salty and slightly effervescent (not to mention loaded with fantastic probiotics) and is a perfect match for melted cheese. Heat kills the good bacteria in the kraut, so I always add it at the end of cooking, not the beginning. Also, don’t be scared of sauerkraut. It’s simply cabbage tossed with salt, left to sit in a container for a few weeks. It’s dead simple, delicious, great for you, and keeps in the fridge for a year after you’re done!

Thanks for coming! Thanks for reading! See you with more meals next week!