I didn’t go to the farmers’ market this week, so here’s a picture of kids on hippos.

We went to San Antonio! We stayed in a hotel on the riverwalk and the kids did parkour from the desk to the ottoman to the bed in my sister’s hotel room while I ate a row of Oreos and three fistfuls of Cheez-Its that she, being a very wise person, thought to bring on our overnight adventure. We went on a boat tour of the riverwalk, and though it was obvious that our river guide had never spoken to another person before, he had some interesting facts to share. I think it was also his first time driving the boat because he crashed into a parked one at the end of the tour and the whole thing was awkward and enjoyable. My sister had her heart set on eating on the riverwalk. I know what’s best for everyone in every situation and I thought this was inadvisable because there is no good place to eat on the riverwalk. But she wanted the ambiance of the bustling tourists and the little river right next to your table, deeming it to be like the Blue Bayou restaurant in Disneyland, which I suppose it sort of is. This is how I found myself eating dinner at the Rainforest Cafe. Blaaaaaaaagghghh. That’s what it’s like to eat there. You’re welcome, I just saved your $50. Seriously, you guys. It cost $50 for me to get an entree, a glass of water, and two kids meals of pepperoni pizza and applesauce cups. Oh and two kids desserts that look like they come free with the kids menu but do not. I got the $18 fish and chips, thinking that it’d be a hard dish to screw up, but Rainforest Cafe rose to the occasion. The batter on the fish (which was described as “flaky white fish”- for 18 bucks I want to at least know what kind of fish I’m eating), hand to God, was like funnel cake. It was shockingly sugary. Soggy in places, jagged enough in others to cut the roof of your mouth. The Safari fries were thick and mealy and underseasoned. The tartar sauce warm and gloppy. The cole slaw tasted of splenda and sadness. And our table was tucked into a back corner devoid of animatronic animals, so the magical ambiance was limited to the dusty plastic vines that had been hanging from the ceiling since 1986. I hate this place. If you’re not such a tight-ass downer you can have a good time there, as my sister and brother-in-law managed with aplomb. They shared a festive (also $18) appetizer platter, sipped a bright tropical cocktail from a commemorative cup, and enjoyed their burger and tortellini. Did my shitty attitude ruin what would have otherwise been a delightful meal? No. I did nothing wrong and this place sucks.

We went back to the hotel for an after-dinner swim in the rooftop pool, which thrilled the kids. The next day we got up early and went to the zoo, and the whole thing was lovely and fun. Except for all the animals being sad. But we got to go in the butterfly room and watch them swirl around us, and ride a wonderful carousel, and a little train, and then we drove home and called the trip a success.

I’ve only got a few dinners to share with you this week, and one of them is just a picture of my partially-eaten meal from Taco Cabana, but here we go! 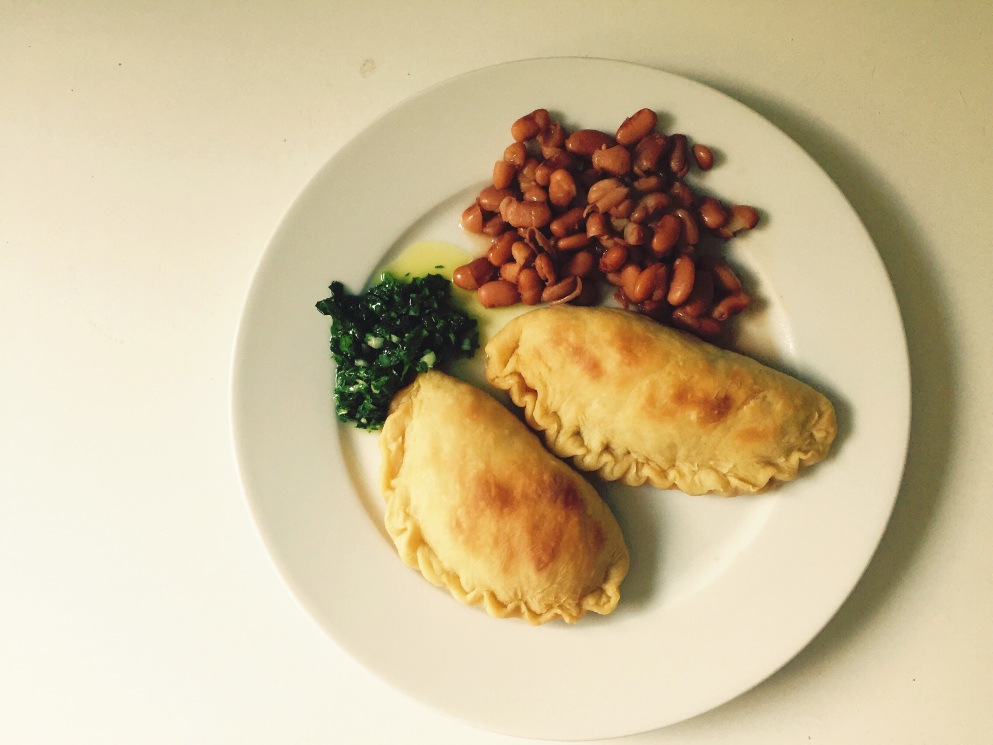 Beef Empanadas, Chimichurri, Beans. I made these empanadas for the first time when we were doing our Argentina dinner (that reminds me, I really need to get back on that- Australia is next on our list and that means more meat pies so I don’t know what I’ve been waiting for) and they were so great. So I made ’em again and we loved them again. I have gotten no better at doing that rope-y fold thing you’re supposed to do around the edge, but they taste great. Especially when you spoon heaps of chimichurri onto each bite. 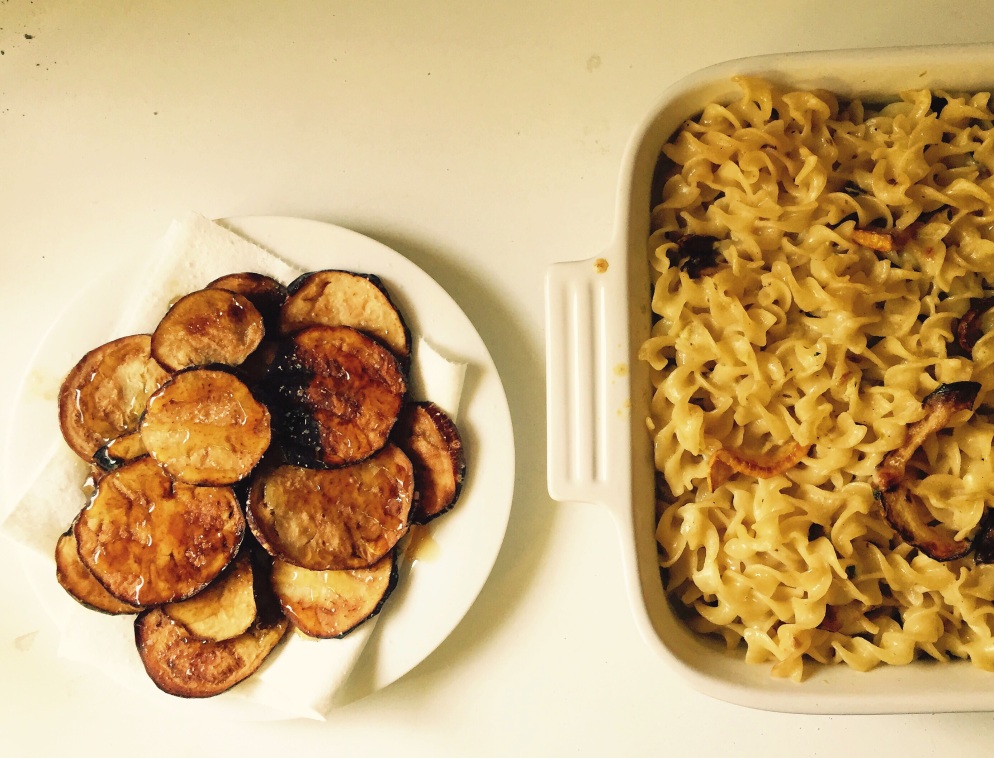 Sopa Rejia with Pan-Fried Summer Squash, Crispy Eggplant with Honey. Sopa Rejia seems to not be a thing outside of the family cookbook I got from my friend Amanda, which her brilliant cousin created after hours of lessons in the kitchen with their grandmother. I grew up next to Amanda and when her granny was visiting she would make us the most insanely perfect enchiladas I’ve ever had- I still haven’t had any better than hers. This cookbook has a recipe for those, along with all her other staples, and this Sopa Rejia, which is basically a mac and cheese enhanced with a pureed roasted green pepper cream sauce. I bought roasted mild hatch chiles from Central Market, so I used those, but normally, you’d broil, skin, and seed 2 poblano peppers, chop them up and puree them in a blender with a cup of heavy cream, a 1/2 cup of milk, and salt and pepper. Then mix that with cooked spaghetti and 8 oz of grated monterrey jack cheese, put it in a casserole dish, top it with butter pats, and bake, covered, in a 350 oven for 25-35 minutes. It’s so much like the famous Al Forno pasta, which I love dearly, but perhaps even better because the roasted peppers add a freshness that makes the dish feel less heavy. I had a couple unearmarked summer squashes so I sauteed them until crispy and tossed them in the mix.

The eggplant is something I read about on the linked blog- The Tipsy Baker. I love her so much. She is the best food writer of all the food blogs I read (a lot)- hilarious, honest, and inspirational. I had heard a few years ago about a book called Make the Bread, Buy the Butter, which purports to tell you what’s worth cooking from scratch and what’s not, and I thought it sounded like just the sort of thing I’d love, but then I forgot about it. I just learned that Tipsy Baker lady is the person who wrote that book, and the reviews look like it is every bit as charming and funny as her blog is, so it has jumped to the top of my amazon wishlist. Oh, I got off track- the eggplant is fabulous.

Chorizo Tacos, Beans. Richardson Farms (they sell at the Sunset Valley and Barton Creek Saturday farmers’ markets) makes a fresh Mexican-style chorizo that I just love, and that has basically no heat to it, so my kids like it too. For an easy dinner I just crisp it up in a pan and serve it with beans and cotija, avocado, and lime.

Sopita. Another dish stolen from my friend Amanda! And her granny. If you’re in a Mexican grocery store, buy a box of that chicken tomato bullion (just do it) and a little bag of vermicelli. Saute the noodles in a little oil until they’re golden brown, then add water and 1 1/2 cubes of the bullion, stirring to dissolve it in the water. Stir and taste the noodles, adding more water if you want it soupier, or if it has all been absorbed before the noodles are done cooking. This rocks, and costs just about $1.

Taco Cabana. I took this picture because I was planning to blog about the food we ate on our San Antonio trip. But then we ate oreos and cheez its, rainforest cafe, a kind bar for breakfast, and a hamburger from the zoo. So. I’m putting this here anyway because I like these cheese enchiladas from TC. I eat them with pickled jalapenos and it’s good. Right after this picture Henry dropped his cup of Strawberry Fanta on the floor. I let him have a special drink because, road trip. I took a sip of it and I swear it tastes exactly like Big Red, with no strawberry flavor at all. This is mysterious to me.

Pancakes, Scrambled Eggs, Fruit. When we got back from San Antonio I had no willpower and no meat or vegetables in the house. I had eggs and fruit and baking stuff though, so we had pancakes. Which I burned, because that’s just how I make them, I guess.

I’ll have more food to share next week, because we are around the whole time. And I bought lots of green things. This makes me feel like a successful person every time I open the refrigerator.

8 thoughts on “Sopita, Eggplant and Honey, Where Not to Eat in San Antonio”