Last night, after the kids were asleep, I came out and worked on a craft project with the new basket of glorious craft supplies I was gifted for my birthday, and then I pored over two new books about crafting with felt, and then I went to bed. I played my usual 20 minutes of pre-sleep candy crush (this is an embarrassing secret that I’m sharing with you. don’t tell anyone I play candy crush every night before bed), and then remembered that I ought to have written a blog post. I had completely and utterly forgotten it was a thing. I think it’s a testament to a very lovely birthday weekend- I had so much fun and my head was so full of ideas for fun things to do with my presents that I didn’t spare a thought for the blog. But I’m here now! Here’s what the week looked like. 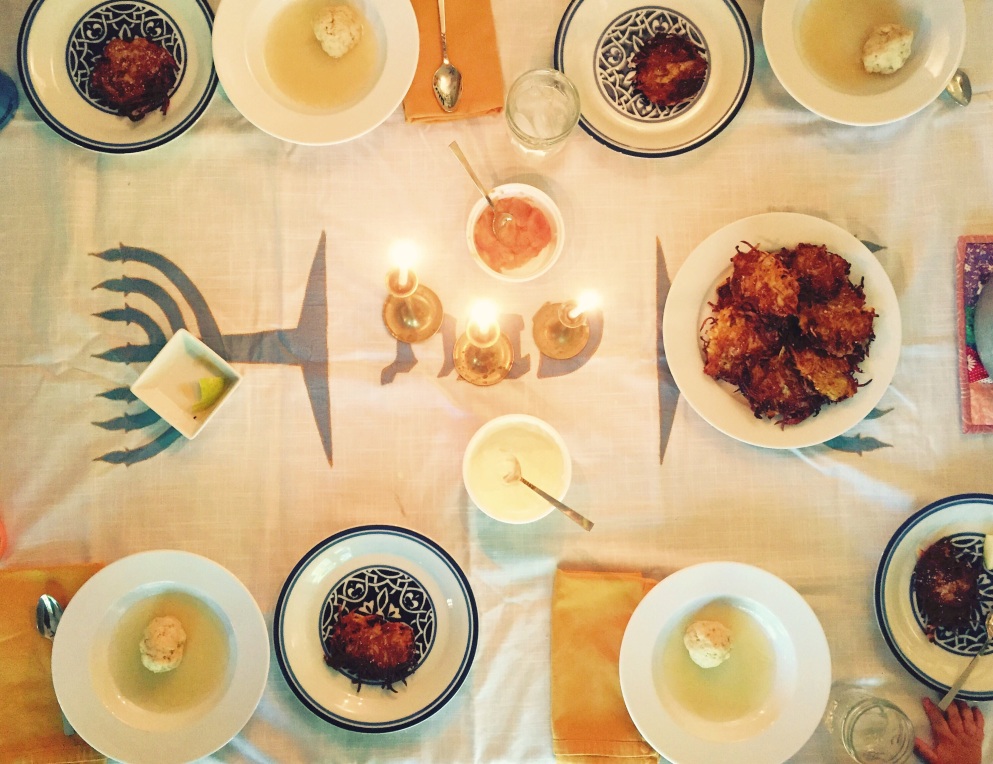 Matzo Ball Soup, Latkes.  It doesn’t make sense to eat these things for Rosh Hashanah- you’re supposed to have a round loaf of challah and apples and honey to celebrate the New Year. But I didn’t have time to make challah and I’ll eat whatever I want to and leave me alone. Kidding! I’m not kidding. I’m suddenly grumpy, and I’m not sure why. I cut into a sweet potato for dinner and little maggoty worms wriggled out onto my cutting board so that really bummed me out (you’ll see that dinner next week- spoiler: yes, we did eat that sweet potato! the (hopefully) non-maggoty portion) and maybe they’re to blame for my attitude. Anyway, I digress. I make matzo balls from the manischewitz box. I’ve made them from scratch before and it tastes exactly the same so, so what, who cares! The box tells you to boil the matzo balls in water and that’s just about the worst advice on the back of any box (and that’s saying something considering that watergate salad is a thing, and it’s made with cool whip and dear God, the horror) it has to be boiled in really good, fatty chicken stock so the balls absorb all that chicken-y flavor. Then it’s delicious. Latkes don’t need me to pimp them here, they’re the greatest things in the world. We had apples and honey for a sweet new year too. 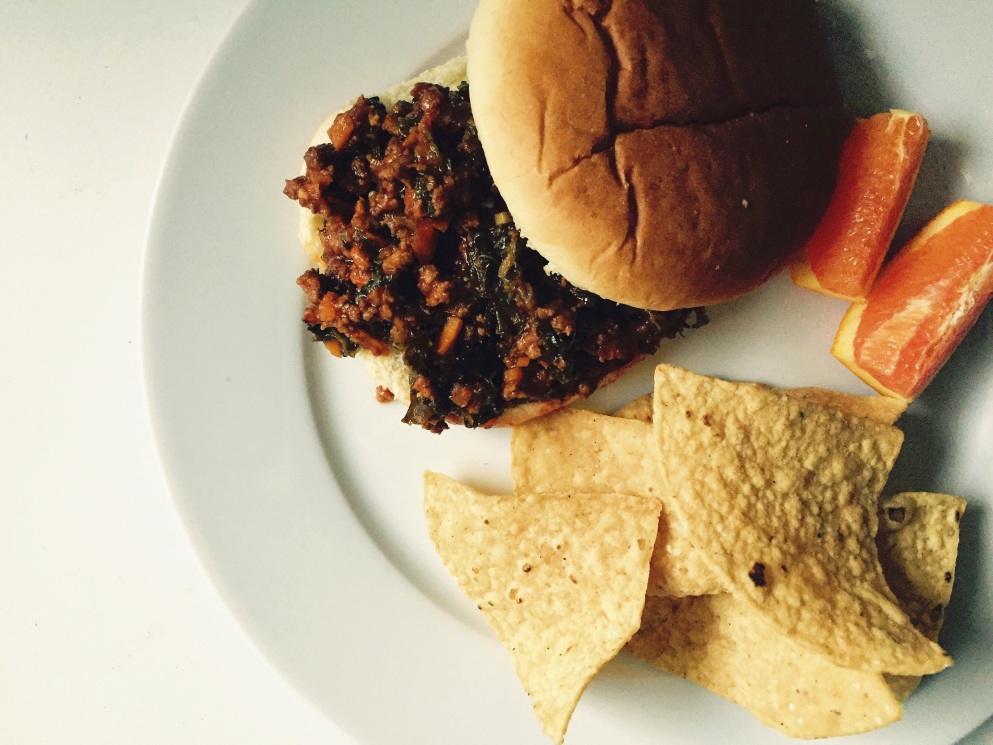 Kale-y Joes. These are a sneaky Jessica Seinfeld-way to get your kids to eat a bunch of kale. Except if they’re sleuth-y they’ll probably notice the kale and be skeptical, as Henry did and was. But then he ate it anyway and loved it. So did George, for a bite or two! I had to do a hybrid of the linked recipe and this other one because I didn’t have enough tomato paste. I think if you brown ground beef and mix it with anything tomato-y plus brown sugar you’re going to end up with something delicious and sloppy. I had Billy Madison running through my head the whole time I was making these but I won’t type the line here because I think probably every other person who has written a blog post about sloppy joes has done that bit and I want desperately to seem unique. I brought up unoriginal blog posts so I could segue into sharing this link with you, which I stumbled across this week, and I think is a serious contender for the worst blog post ever written. Scroll down slowly, soak it all in.

Gluten Free and Dairy Free Brownies with Sea Salt. I’ve made this recipe with gluten free flour before just by subbing Cup4Cup for the all purpose. It’s the only trick up my gluten free-sleeve. Anyway, it works out just great. But I wanted to try to make them dairy free too by replacing the butter with coconut oil. After mixing up the batter I was prepared to call the attempt an unmitigated disaster. The batter seemed to thoroughly reject the coconut oil. I wrestled a thick, modeling clay-like mass of  dough into the pan as coconut oil wept from it like a slick clear discharge from an open wound. Baking only exacerbated the problem. When I checked on the brownies at the 20 minute mark they were submerged under a layer of oil. Since I had nothing to lose, I decided to keep baking them to see what would happen. It took probably another 15 minutes, but the brownies did reabsorb the oil and damn if they aren’t actually pretty good! The longer time in the oven made the edges a little too hard, but I liked em fine anyway. So, you know. If you have to eat gluten and dairy free brownies these are a thing that could work for you.

Black Beans with Feta, Red Onion, Cilantro, and Lime. Ever since I read this article, which, fair warning, spends a not-insignificant amount of time talking about farting, I haven’t soaked my black beans before cooking. Not because of benefits vis-a-vis farts, but because they taste better that way. These taste so good in fact, that my children, who normally prefer to alternate lunches of plain buttered noodles and squeeze-y yogurts plus handfuls of gummies, both ate big bowl fulls, with very little adornment. I really loved eating this too, and felt the swell of pride I always do when I manage to eat a meal without a huge pile of bread included. Also, I think that’s glitter that’s scattered in the top left corner of the picture, but who can say? Full disclosure: the kids had second lunches an hour later of plain buttered noodles. 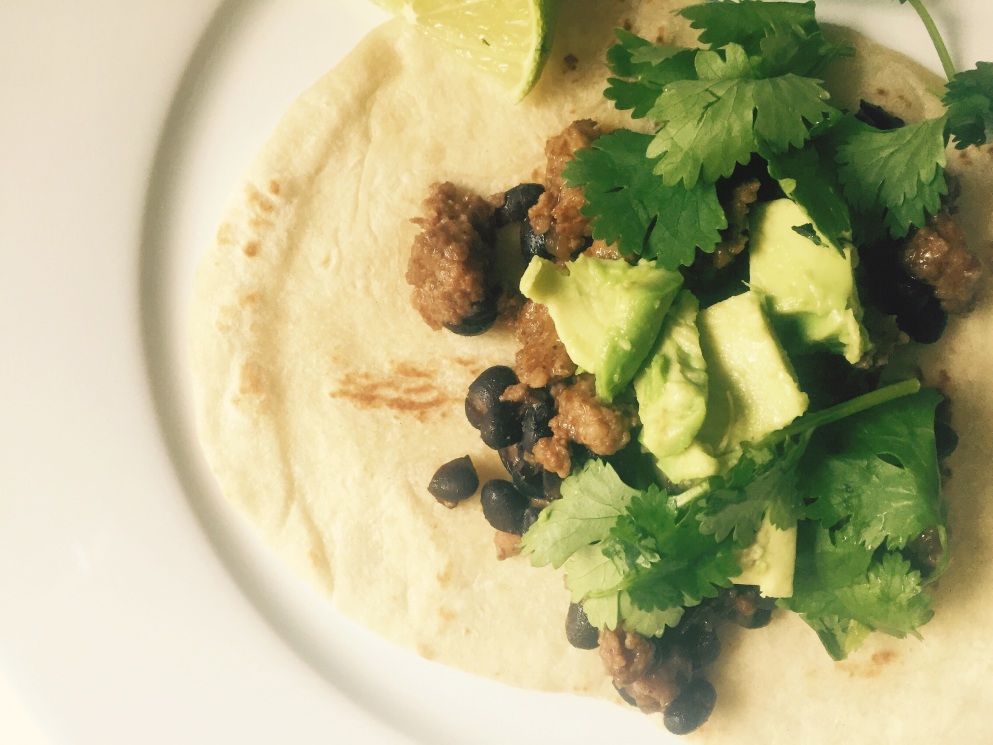 Coconut-Lime Pork Tacos with Black Beans and Avocado. I cooked the aforementioned black beans for this dinner, WHICH IS AMAZING. If you happen to have a can of coconut milk, pineapple juice, and ground pork in your fridge it should absolutely be the answer to the ‘what’s for dinner?’ question. Nobody’s got all three of those things on hand, but you should add them to your list and try this. The spices and coconut milk make it feel special, but for picky eaters it tastes close enough to the traditional ground beef tacos to make the cut. This makes a pretty huge pan-full of food and I think Henry ate close to half of it.

Ginger Nuts. Isn’t that an adorable name for a muffin? There’re no nuts involved so I don’t know why they get a nod. This is a fun muffin! The batter is so luxurious and they bake up beautifully. For some reason the recipe made 24 instead of the 12 it purports to. The whole recipe feels fun and old-fashioned- you get to dissolve baking soda in boiling water! Doesn’t that sound positively 19th century? They taste sophisticated- not very sweet. In fact, they might be close enough to the not-sweet-enough side of ‘not very sweet’ that I think I might want to toss a handful of chocolate chips in the batter next time, or maybe sprinkle the muffins with big crunchy sparkles of turbinado sugar before baking them. Thank you to my friend, Sax, the woman of a thousand talents, for sharing the recipe!

Sax says they’re best hot out of the oven, and that they freeze well. 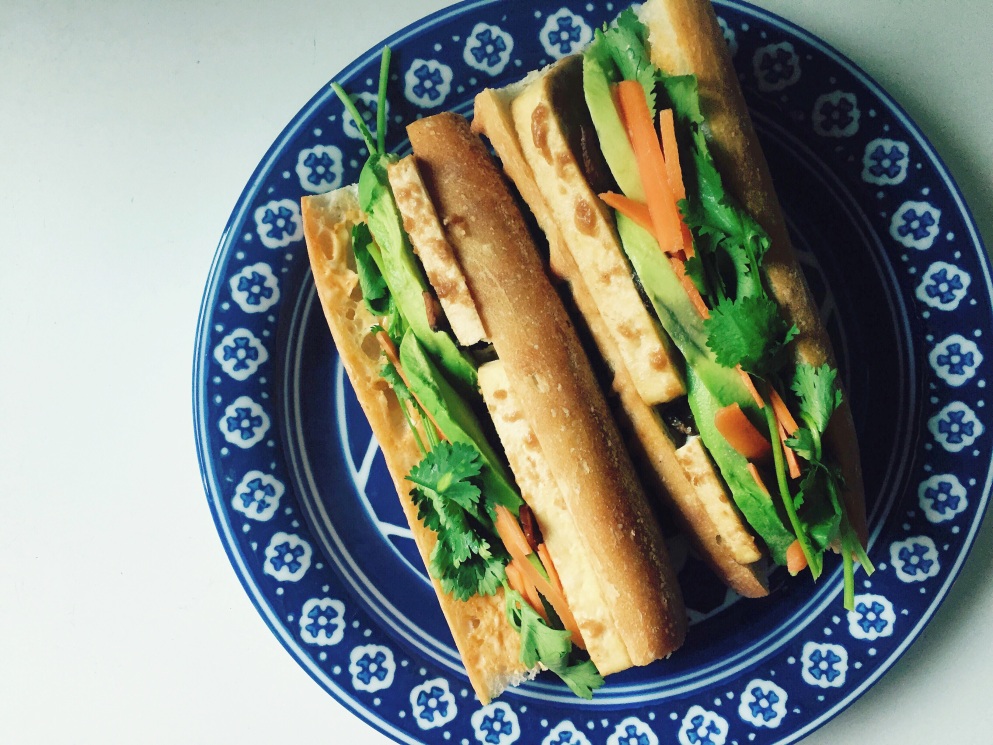 Vegetarian Bahn Mi. These have sriracha butter, and crispy mushrooms, and pickled carrots, and avocado, and if all that is sounding pretty good, I should tell you that these sandwiches also sport big slabs of flabby, flavorless tofu. I really love and trust this blogger so I’m willing to bet the tofu problem occurred on my end. Not enough marinade? Not cooked long enough? Or maybe I just hate tofu. Whatever the reason, the tofu had me really wishing that there was a big pile of crispy pork on the sandwich instead, and I count that as a failing for a vegetarian bahn mi. I like the idea so much though, so someday I’m gonna try again, but this time weight the tofu for a day or two like in this recipe and then maybe try slicing and basting it with a sugary lemongrass concoction, and then broiling the slices. I like a crispy, salty, and caramelized protein on bahn mi and I’m not sure if tofu can be any of those things, but I’d like to try. 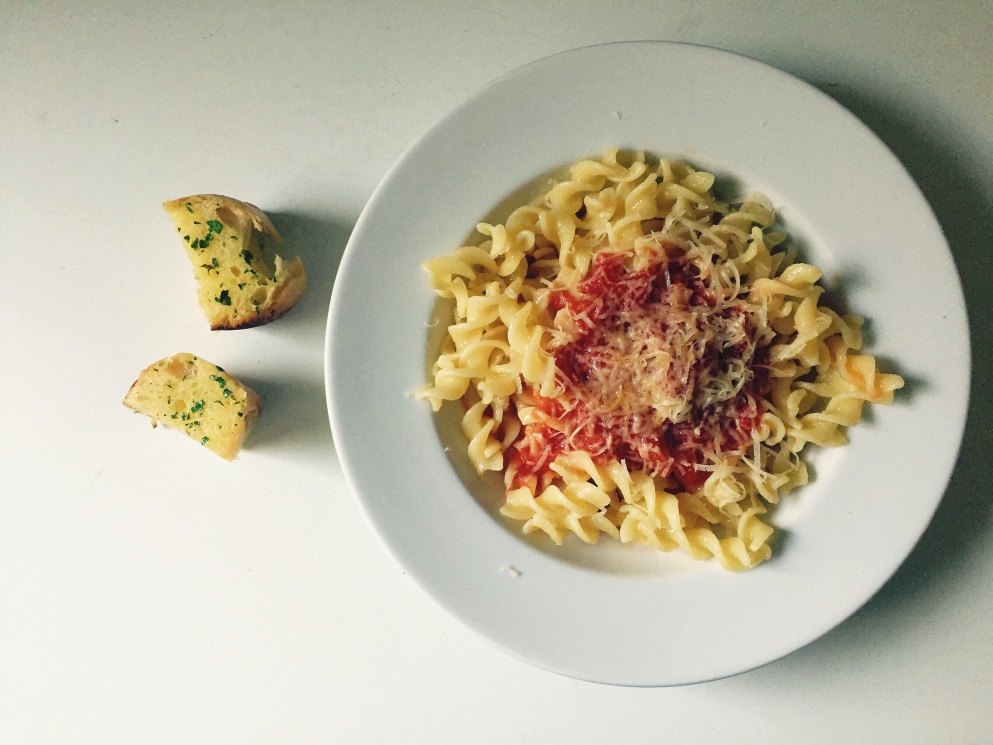 Marcella Hazan’s Tomato Sauce, Sack Full of Garlic Bread. Andy and I went on our first date sixteen years ago, on the day before my 16th birthday, and we usually do something to celebrate that anniversary. This year, Andy bought me a field hoe, and a new hose, and a package of Ho Hos. Excluding the ho hos, these were all things that I desperately wanted, and was so happy to receive, even if it meant accepting a ho-themed gift from my darling husband. I wanted to make Andy a special dinner, but the day ended up being one of those tremendously exhausting sorts where Henry wanted to play another rousing hour-long game of feed-the-turtle-puppet right before dinnertime and George wouldn’t unclamp his mouth from my nipple. You guys are probably sick of me talking about my boobs all the time. So I made this sauce, which I had been craving since mentioning it in last week’s post anyway, and found all the ends of bread loaves in the freezer and paved them with garlic butter and wrapped them all up in foil and put them in the oven. The resulting foil bag of garlic bread garbage didn’t look good but tasted awesome. The red-sauce and garlic bread bit was romantic, I reasoned, because Andy and I said “I love you” to each other for the first time after a date in the big city in which we enjoyed a dinner at the now-shuttered Spaghetti Warehouse. I still have the little Italian flag they stuck into our dessert. Did you know I was such a sap?

Gnocchi a la Parisienne with Summer Vegetables, Bruschetta. I got to spend my birthday doing exactly what I wanted- cooking an elaborate and time-consuming meal for myself (and my family! I shared, you guys). And my sister helped me, which was really fun because babies (really nice ones!) have made it hard for us to do that recently, and she’s my favorite person to cook with. I thought and thought about what I wanted to make, and settled on this gnocchi because I love it dearly, and it takes forever, which would usually make me feel guilty, but not on my birthday. It’s the same dough you’d use to make eclairs and profiteroles, except you mix in comte and dijon mustard and lots of lovely herbs. Then you pipe the gnocchi into simmering water, and then you crisp them up in brown butter and toss them with gently warmed squash and tomatoes and nicoise olives, and then you pour more brown butter on top. It’s spectacular, every bite. We ate every last bit and then mopped up the pan sauce with our grilled bread.

Raspberry Pavlova. My birthday dessert! Isn’t it lovely? A pavlova is just a giant meringue, crackly on the outside and marshmallow-y in the middle. When you top it with whipped cream and berries you’ll have one of the all-time best combinations of flavors and textures. Another fine quality in pavlovas is that they don’t last at all. You have to eat them all up, in one sitting, lest they turn to mush. So we all had seconds and I had thirds and didn’t regret a single morsel of it. I’ve got so much love and gratitude in my heart for my friends and family- thank you for making my birthday such a very happy occasion ❤ See you next week!