I’ve fallen into a pattern where I use this opening paragraph to complain about whatever I’m worried about at the moment. I started to do it again today, but in the spirit of thanksgiving, I deleted all my minor quibbles and I’m gonna be positive instead, dammit! We are still screen free, which means we’ve made it almost two weeks. Everyone is happier and more productive, except for maybe me (on the productive side, I mean, I am happier). I spend a lot of time reading books, some good (The Lion, the Witch, and the Wardrobe) some exhaustingly bad (The Berenstain Bears No Girls Allowed– that book is super duper sexist, all while trying to be really progressive, which somehow makes it worse) and facilitating the kids’ project ideas, which is a nice change from the constant negotiating about how much more television they can watch, but which means that I’ve lost the screen-time babysitter that I used to use to get stuff done. I think as we go farther down this road the kids will get more accustomed to working and playing without my help, and we’ll be able to find a balance in our daily activities where there is time for my projects too. Have I somehow slipped back into my complaining pattern? Yeah. We had a glorious week- good food shared with friends and family, and a perfect camping trip laden with terrible food choices. Here’s what it looked like. 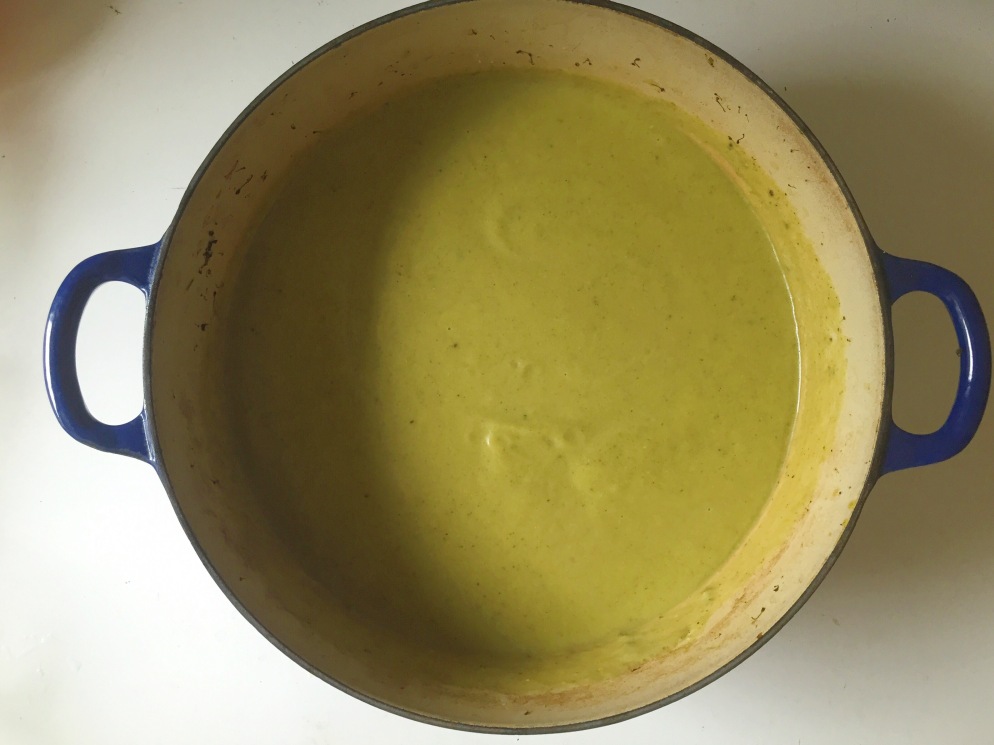 Broccoli Soup with Lemon and Parmesan. It’s a big pot of soup, y’all. I used the right amount of broccoli this time so it was creamy and rich instead of watery and flavorless. I didn’t have any chicken stock though, so I made a parmesan broth with leftover rinds I’ve been stockpiling in the freezer and it works really well in this application.

Potluck Dinner: Broccoli Soup, Challah, Sweet Potatoes with Coconut,  Pomegranate and Lime, Green Salad with Aged Cheddar, Avocado, and Lots of Other Stuff. Helen and her family and Molly and Dustin joined us for a potluck on Monday, just because. I wish we could eat every meal like this. It feels like a celebration, but it’s so easy. I made soup and challah. Oh, and I gave that challah the 24 hour rest the recipe calls for for the first time and guess what? It tastes just about the same as the bread without a rest! So I won’t feel guilty for skipping that step from now on. Molly made a beautiful smashed sweet potato dish with coconut flakes, coconut milk, pomegranate seeds, lime, and cilantro. It was glorious. Helen made a big salad with everything in it- huge generous wedges of avocado, little cubes of cheddar, dried cherries, nuts, and a dressing I’m obsessed with. Brianna’s Ginger Mandarin- it’s store bought, but exceptionally good. It tastes like sesame oil and ginger and in spite of that goes well with everything you put it on. 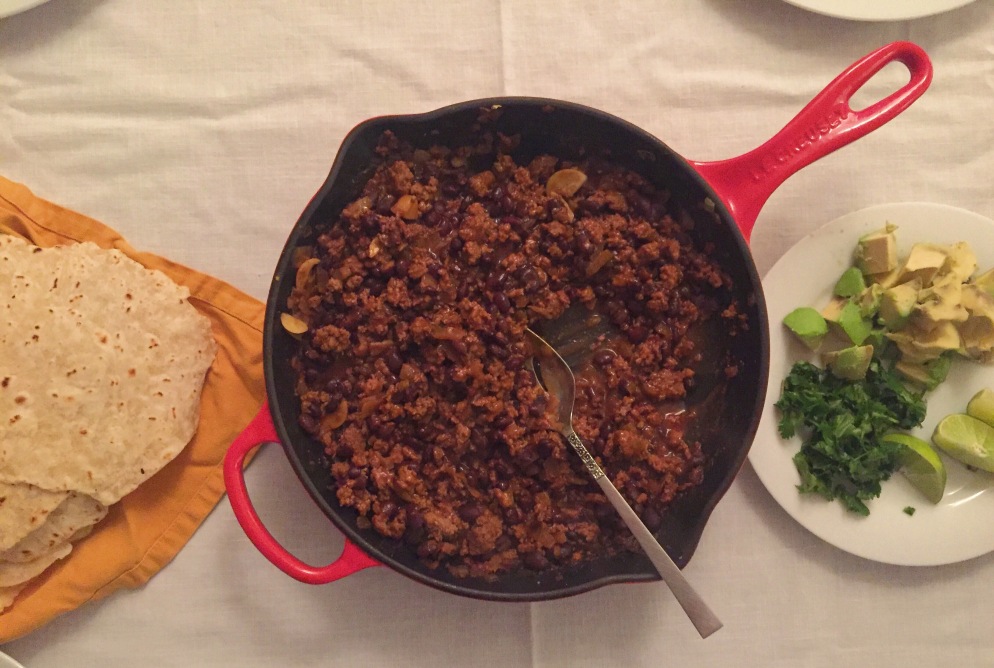 Coconut-Lime Pork Tacos, Homemade Tortillas 1.0. I’m obsessed with these tacos. I don’t think there’s a better use for a pound of ground pork.

Vegetable Pakoras, Green Chutney, Coconut Rice. There’s a whole green apple blended up in that chutney! And we cooked the rice in half a can of coconut milk leftover from the coconut-lime pork tacos plus some of the coconut water from a coconut we split our own selves! I tried to crack the thing with the back of a chef’s knife like the pros do but it wasn’t happening, so we just sat on the kitchen floor and bashed the thing with the claw-end of a hammer. We were all splattered with the spray of coconut water, but got the thing open in the end. The pakoras were good, I think. Everyone loved the cauliflower and the butternut squash. I also fried up a beet and nobody liked that but me, and I mostly just liked it because it was another fried thing to put in my mouth. 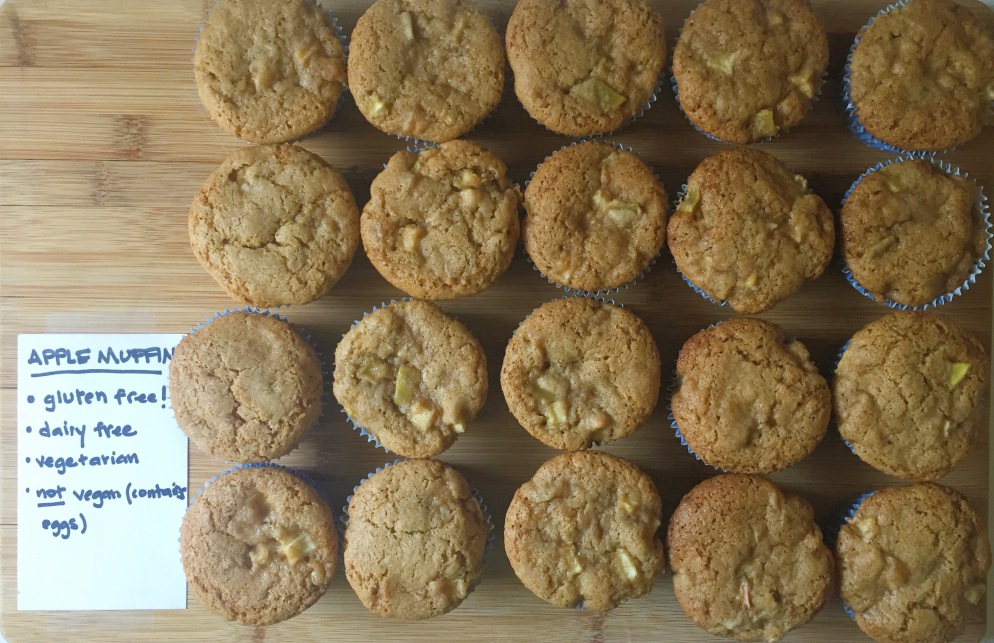 Apple Muffins. These muffins are everything. You gotta make them. Do you know what’s weird about them though? They smell exactly like the food counter near the checkout at IKEA where they sell 99 cent cinnamon rolls. I know what you’re thinking- that it’s just a cinnamony smell- but there’s something more to it. A sort of new cardboard box smell mixed in. It doesn’t make any sense, but these are the facts and I’m just reporting them to you. We brought these to the potluck dinner on the first night of our camping trip. I’ve brought muffins to nearly every unschooler event I’ve gone to and I like perpetuating the idea that I only feed my family muffins. 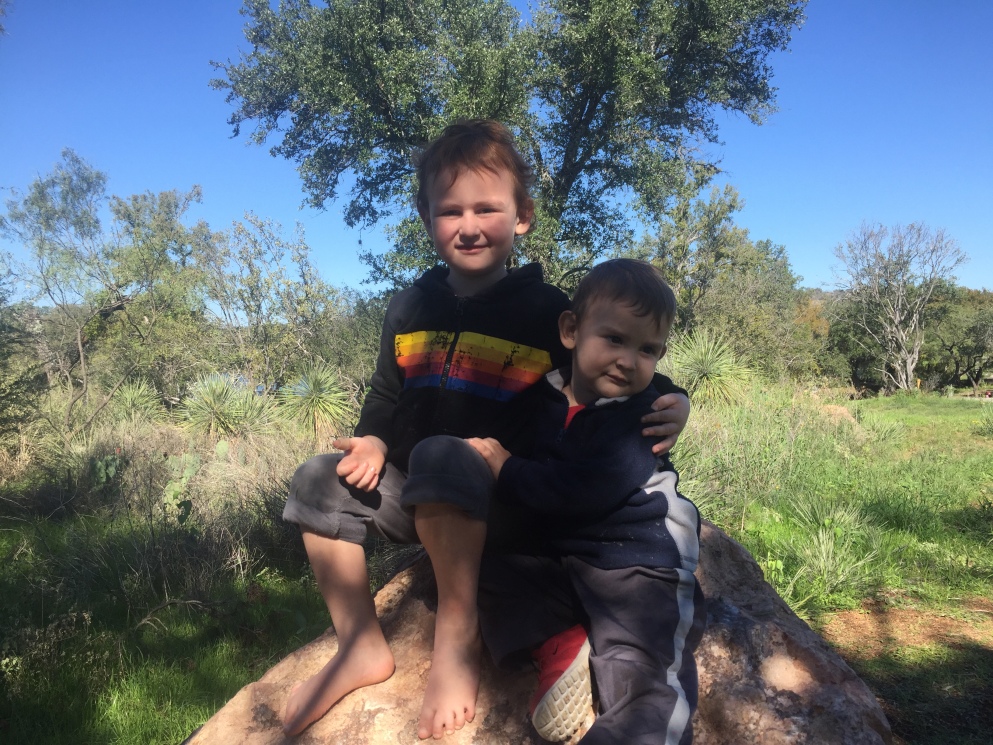 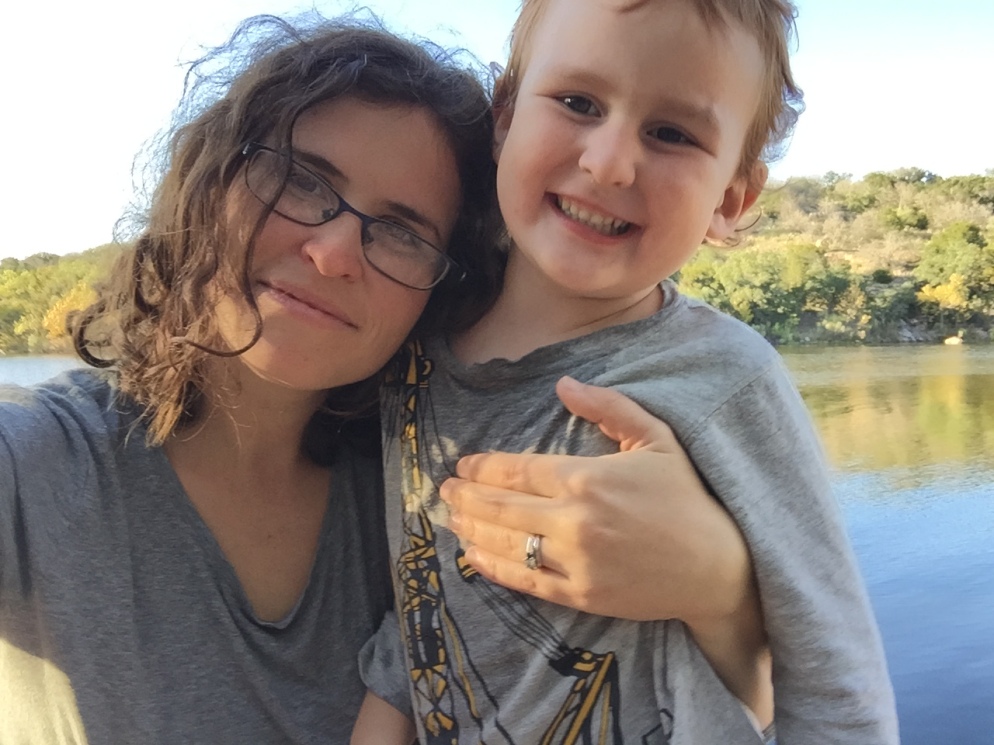 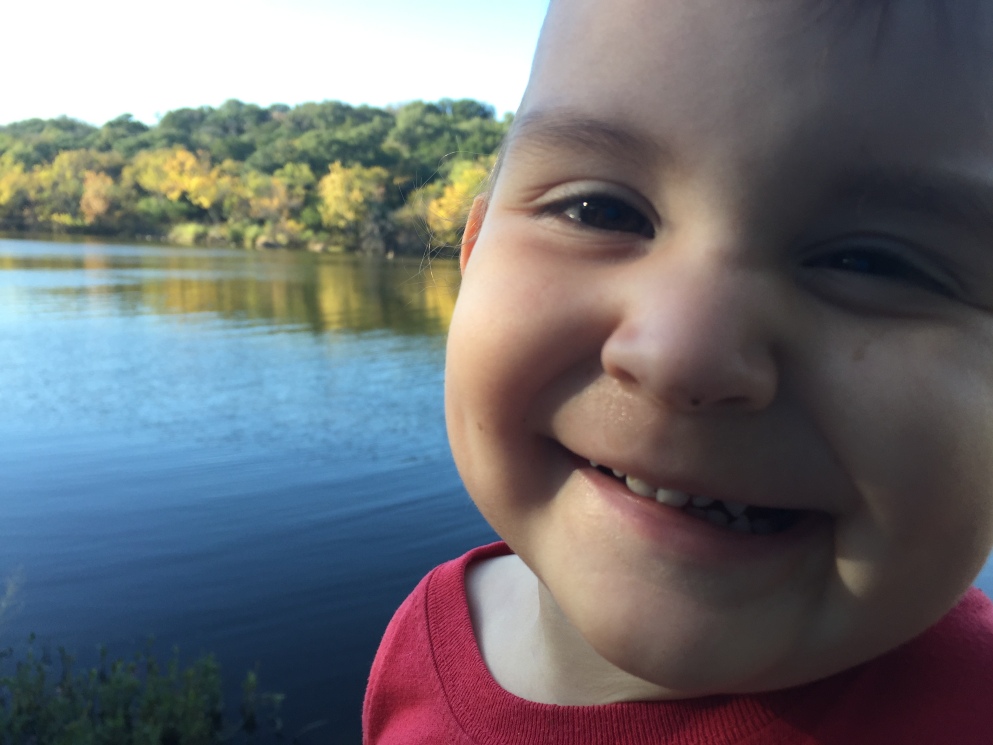 We went camping! The boys and I joined 30 other unschooling families in a massive group camp out. We stayed two nights and did all the things- camp fires and s’mores, the boys’ first canoe ride and dance party, and tons of exploration and splashing in trickily waterfalls. We hiked down to a place called the Devil’s Waterhole (compelling name, yes?) and the kids spent an afternoon throwing rocks in the water. Henry ate handfuls of wild mustang grapes growing nearby, the juice dripping all over his neck and belly (and eventually giving him an itchy rash, but let’s not dwell on that!). I always think of camping as an excuse to eat badly. We brought a party-sized bag of Doritos, hot dogs, hamburgers, trail mix with 90% m&ms, squeeze-y tube yogurts, s’mores fixins, and a package of double stuf Oreos that didn’t survive long enough to make it to the camp out. By our second day I felt completely disgusting. Our friend Patches was on the site next to us and generously shared the beautiful cast iron pot filled with crispy rosemary potatoes and pork, and another dish of sauteed zucchini with mushrooms and onions. It was the best thing I’ve ever eaten- I think my body was desperate for a vegetable. I’m totally inspired to ditch the processed food garbage the next time we camp and cook like Patches instead. Yes I will, yes I will. I loved being surrounded by these wonderful families. Groups of kids would come together for impromptu adventures- building dams by a drainage ditch, sharing our one terrible walmart fishing pole and digging for worms and grubs as bait. We didn’t catch anything but we did see a turtle and a heron-y thing, so that was cool. My friends Lindsay and Carla and their families hung out and helped each other the whole time. I never had to light a fire, I got to eat some of Carla’s incredible carrot-cake inspired banana bread for breakfast, and Henry found constant entertainment in Lindsay’s husband Nick, who generously supplied Henry with an endless stream of math problems for Henry to solve around the camp fire. On our last night there, Patches threw a massive dance party for everyone, with a machine that splashed colored lights off the branches of the trees surrounding the campsite and glow sticks for all the kids. Henry and George thought it was the greatest thing ever. The next morning the weather turned cold and a bit rainy, and we packed up and left quickly, but on the drive out of the park Henry said “I will never forget this trip.” It was magical, start to finish. I also felt really close and connected to my kids, and grateful beyond measure to the beautiful new friends we’ve made in the unschooling community. Love abounds.

Pita Pizzas. We were home from the camping trip in time for lunch on Saturday, so we had the opportunity to eat real, unprocessed food, but I just made pita pizzas, because, pizza. We ate better for dinner! 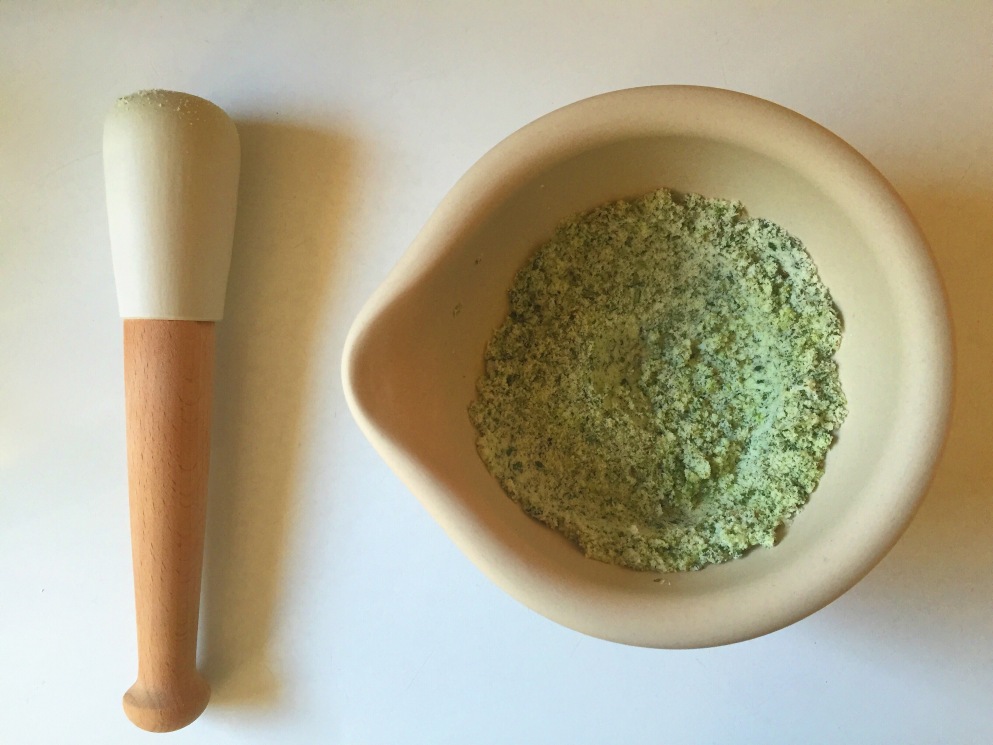 Rosemary Thyme Salt for Dry-Brining a Giant Chicken. While I was driving home, Andy went to the farmers’ market to pick up the massive super-chicken Dewberry Hills Farm sells for the holidays. They’re way cheaper than the heritage turkeys we’ve bought from the market in previous years, which come out sort of stringy and dry no matter how lovingly you prepare them. And they’re way cheaper. I have no idea what this thing weighs, but do know that it’s over 11 pounds because that’s how high my kitchen scale goes up. We’re having a quiet Thanksgiving dinner with my sister Helen and family on Wednesday, and then going down to San Antonio to spend real Thanksgiving with Andy’s extended family. I wanted to host one at my own house because I’m a control freak and want to have all the dishes exactly the way I like them, and I also want all the leftovers and sandwich fixins. I’m making the food52 genius turkey recipe, and the thing is dry-brining in the fridge now. 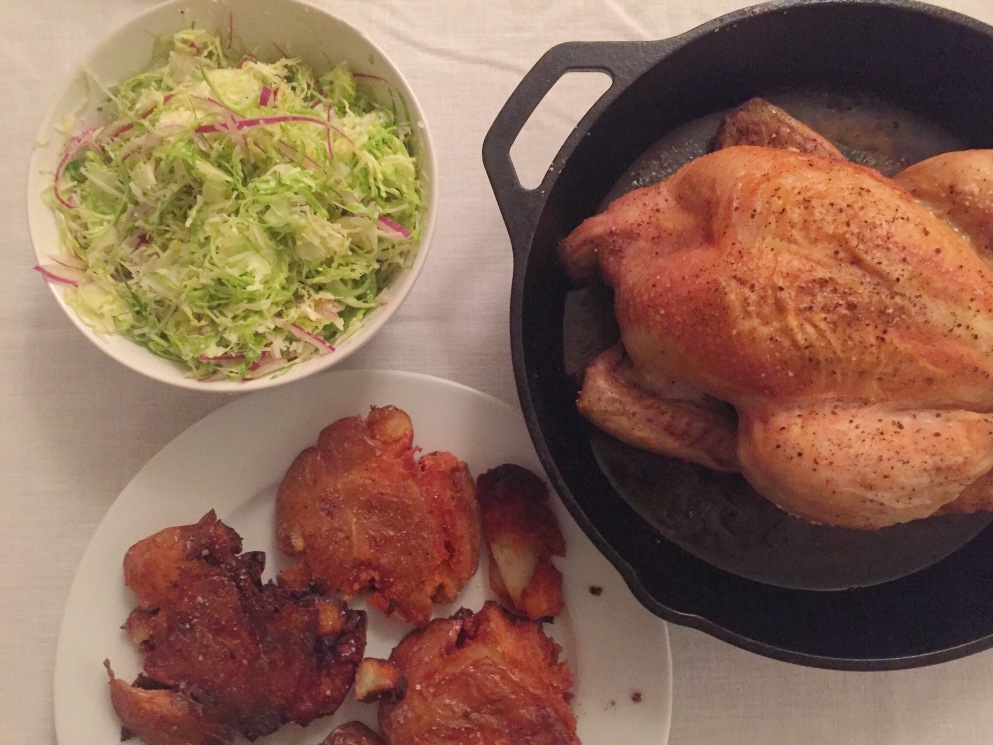 Roasted Chicken, Crispy Smashed Red Potatoes, Shaved Brussels Sprouts Salad with Red Onion, Lemon, and Pecorino. I needed to cook another chicken too so I could make broth for gravy and stuffing, so we had a simple roast chicken on Saturday night. I have waxed poetic about these crispy smashed potatoes before, and they’re still delightful. I wanted to eat something fresh and green too, so I made this salad, which is maybe even more delicious than the potatoes. You shred brussels sprouts as thinly as you can on a mandoline and then toss them with wisps of red onion that you’ve soaked in water to take some of the sting out, a bright lemony vinaigrette with a generous squeeze of honey, and a ton of shredded salty aged cheese. Together they make a salad that you don’t want to stop eating, that is somehow reminiscent to me of the all-you-can-eat Olive Garden salad, which I haven’t had since I was 12, but I remember loving. 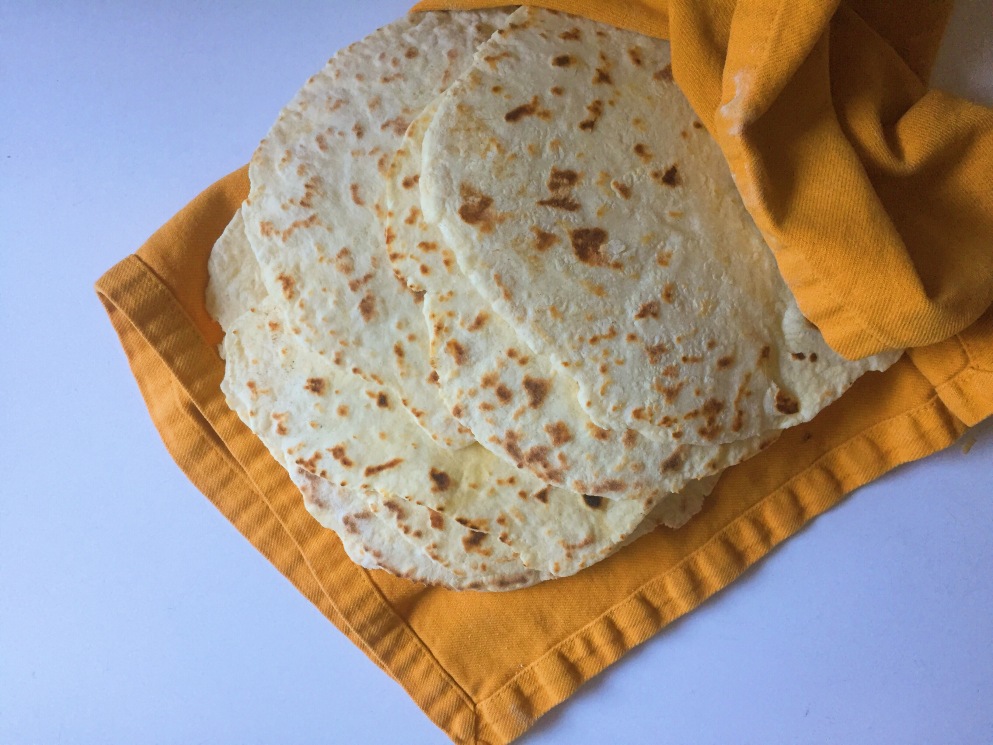 Homemade Tortillas 2.0. A kindly reader, a tortilla muse, tipped me off to this tortilla recipe from Homesick Texan, which uses an insane amount of baking powder and  milk and results in tortillas that are devastatingly tender and pillowy. If you’re familiar, they’re in the camp of Mamacita’s or Taco Cabana’s style tortillas, and Andy was over the moon. They’re definitely better than the brittle crackery ones I had been making, but maybe they’re just a bit too far to the soft and sponge-y side, so I think I might try to make a hybrid of the two recipes. Tortilla science!

Potato, Egg, and Cheese Breakfast Tacos. One of the best things about those crispy smashed potatoes is having leftovers for breakfast tacos the next morning.

Chicken Stew with Biscuits. I kept seeing people post pictures of square biscuits on social media and I would wrinkle up my nose at them- shouldn’t biscuits be round? But then it occurred to me that if you make square biscuits you don’t waste any dough, and you don’t have to re-roll your dough scraps and make tougher and tougher biscuits. So basically, they’re brilliant. I did it this way for my favorite chicken stew to use up some leftover shredded chicken and I came up with 16 biscuits out of a recipe that normally only makes 12, enough to completely fill a 13×9 inch pan. We brought the stew to Andy’s parents house and finished cooking it there- it is so good. And Andy’s mom made a pumpkin cheesecake with a praline top AND cranberry white chocolate oat cookies AND dulce de leche ice cream and I ate all of them.

Happy Thanksgiving to you all! I hope you all enjoy massive superchickens and potluck-y meals and good times with your families and friends. I’ll be back here on Wednesday to share a special guest post from my talented sister- some foodie fiction to get us all in the mood for sharing a big meal with our crazy families. See you then!