Andy surprised me with a date to a fancy restaurant on Sunday night. I mention this as an excuse for not writing a blog post in time for Monday morning. I am not mentioning the name of the restaurant because I woke up this morning with rather a bad case of food poisoning, and I don’t think it was the restaurant, because yesterday (Sunday) I also ate some hummus that had sat at room temperature for five hours and definitely it was that that did it, right? Anyway, I don’t want to say the name of the restaurant and have you associate it with food poisoning when they probably didn’t do anything wrong. So, yes! Getting surprised with a date night at the end of a long weekend/week/several years with children is the greatest thing. I eat every single meal with my kids, all the meals, and they’re nice people and funny and it’s pretty okay except I have to get up a hundred times because someone needs more water or apple juice or a napkin or more rice or to have their hands held while they sit on the potty and my food gets cold. Instead of this, I got to leave it all behind and go out with Andy, who wore the very tight pants I love and who smelled of the cologne he has worn from time to time since high school, which makes me feel like I’m sixteen again. The restaurant was so pretty and I ate the most delicious chicken liver mousse on the smokiest grilled sourdough and it definitely did not give me food poisoning. I also had ravioli that was okay. It bummed me out a little because the pasta dough was made with whole wheat flour (no thanks

This morning I woke up feeling sick. My dear Molly texted to ask if I was home and then dropped by with a sack full of tacos for me and big fluffy pancakes for the boys in honor of Galentine’s Day, which as we all know is February 13 and is officially celebrated by plying your best lady friends with breakfast foods. We both agreed it was the ultimate tragedy to bring a sack of delicious greasy breakfast tacos to someone with food poisoning. I put the tacos in the fridge and fed the kids the pancakes. I skipped lunch but felt hungry by mid afternoon and went for it- I reheated that taco in the oven until the edges were hot and the middle was lukewarm and I enjoyed the fuck out of it.

Here’s what we ate this week: 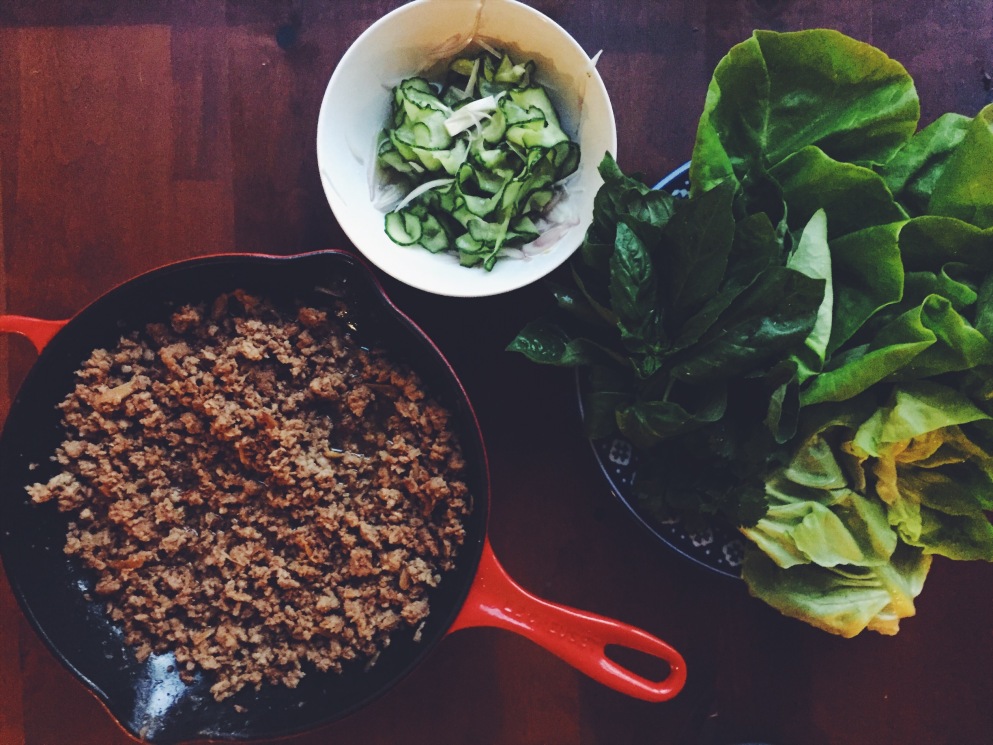 Crispy Thai Pork with Cucumber Salad. I don’t remember Monday. I think we might have set some things on fire in the backyard? We definitely ate this pork! It all blurs together. So I’ll use this space for a weekly business update. We are no further on the insurance question. No one will talk to us or return our calls. Andy needs to order pump supplies soon (hundreds of dollars) so talking to a person would be nice, Gigi who allegedly does this for a living. Also (not entirely unrelated to my short-tempered snark in the last sentence) I’m really slacking on the meditation. I blame the dog. Gonna get back on that wagon this week. 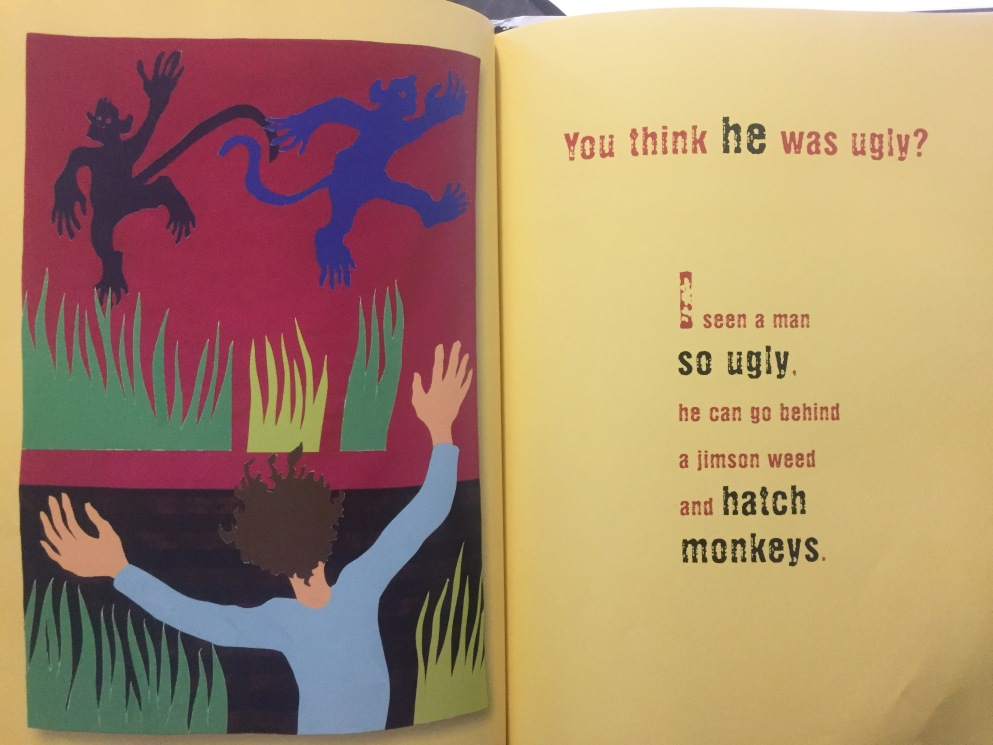 Pages from Lies and Other Tall Tales, a delightful find from our local library. I can’t wait to have an excuse to use that hatching monkeys insult on someone.

Andy’s been teaching Henry to play poker. Here you see the product of Henry’s work to use one deck of cards to make poker hands ranked from worst to best. I thought it was fun!

Chorizo with Roasted Pineapple and Guacamole. I hated everything on Tuesday. Betsy DeVos was confirmed and I read that all the drama about getting one more Senator to flip to vote no was totally fake- that McConnell had the votes he needed all along, Murkowski and Collins had his blessing to vote no because it was better for them politically and he would still have the numbers he needed. It didn’t matter that Cornyn and Cruz received overwhelming feedback from constituents on the left and right begging them to vote against her confirmation because they are not responsive to nor representative of the electorate. They care about winning their Republican primary in 3 and 1 years respectively and nothing else. I should have known this was true, but I didn’t. To have so many people across the country reach out to their representatives and to have it not translate into changing a single Republican vote was, to steal a word from Gorsuch, disheartening. And then Cornyn had the absolute gall to put up a fundraising link on facebook right after DeVos’s confirmation. I commented on it to say I was so disappointed in his vote and that he had failed our children and old white guys felt compelled to chime in and say I’m a hack and a libtard. And then some mofo on the Austin Area Homeschooler’s facebook page posted a link to a Breitbart scholarship that is only available for white males and it just felt like everything was terrible and the world is only old white guys who get to do and say whatever they want. And then I had to go to parkour and that sucked too.

But the tacos were good. I rarely make the same meal twice in a span of two weeks, but George loved the chorizo so much last week and asked for it again this week so I did it. I’ll share the recipe here once I can work up the energy to type it up.

Parmesan Chicken with Red Cabbage and Baby Fennel Salad. On Wednesday I woke up ready to get shit done. I went to Blue Earth Farm and did Shovel Fit (light) with Joanna. I did not actually use a shovel. I used a little pick to break up dirt clumps in the new garden beds and I thinned out some lettuce. I don’t think I burned a lot of calories but I loved every bit of it. Working in the sunshine, talking to Joanna, marveling at the fact that our children could entertain themselves peacefully with minimal adult oversight. I’m gonna try to go once a week, and this week I’m gonna dig some big ole holes with a real life shovel. That night I researched how to do an open records request for our Senators, to see if I could ask for the number of constituents who contacted their offices about DeVos, and what way they wanted the Senators to vote. I drafted letters and researched who to send them to (harder than you’d think) and the next day I mailed them. I also mailed my ergo, that I have used to carry Henry and then George for the past five years, to Carry the Future, so it can be sent overseas to a refugee family in need. And I sent valentines. All of these things together had the effect of making me feel less powerless. I felt better. The chicken and salad were both good, but were not the focus of my day.

Last week my mom said, hey, great blog post but why didn’t you write about how well the kids are doing in swim class? These are for you, Gangie! We’ve had three classes, one a week, and Henry can swim to an island-y thing without floaties and George swam completely submerged, with help, for a couple of seconds. In this picture, he’s practicing turning around and getting back to the edge of the pool in case he every accidentally falls into one.

After swim class we dropped by Christy’s house because she had just gone to the Japanese grocery store and picked us up some treasures. She and her girls had to run to their next appointment but the boys and I stayed behind and (creepily) had a picnic of onigiri stuffed with salty salmon flakes and pickled plums on her front lawn.

A soup that is almost, but not quite, entirely unlike pho. It’s rice noodles in a ginger-spiked chicken stock with herbs and lime squeezed on top.

Miso-Glazed Salmon, Coconut Roasted Kale, Onigiri, Japanese Cucumber Salad, Not-Katsu. Speaking of bastardized versions of classic Asian dishes… Katsu is a breaded and fried meat cutlet. What I served was reheated leftover parmesan chicken with a dipping sauce that was not much more than ketchup mixed with soy sauce because I didn’t have any worcestershire sauce to do it right. Everything was pretty good though, even if it was an odd assemblage of items.

I woke up early on Saturday morning to help Jordan and Helen pick up the world’s largest couch. We won’t be starting our own furniture moving company anytime soon- we went to the wrong house and rang and knocked on the door at 8 in the morning. It was blessedly, mercifully, vacant, which we noticed after peeping in the windows. Once at the right house, we struggled to get the massive sectional through the front door, bumping an heirloom grandfather clock and denting the door jam in the process. So we suck. But Helen and Jordan have a sweet ass new giant couch! Then we hung out with Joanna for a bit at the Buda Farmers’ Market. Oh did I love that! I bought fudge and a Mexican chocolate brownie from the vendor across from Joanna. “Good witch” incense and kaolin clay soap bars from another lady, and green onions and thai red pepper flakes from another lady. This last vendor asked if I had a garden, and I said, yes, I’m building my raised beds now, and she gave me a box with dozens and dozens of carefully packaged and labeled seeds of all kinds. They’re from some doomsday seed company, meant for you to have all you’d need if the world ended right now but you and your seed box were somehow spared. She had 300 boxes to give away and we stocked up. Super exciting. 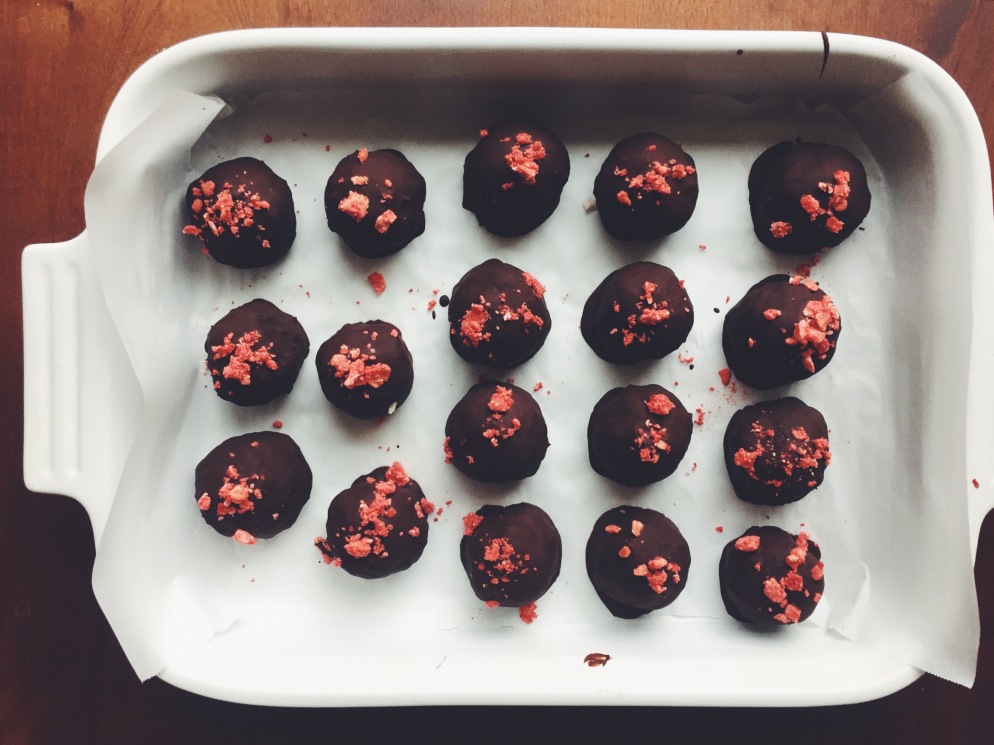 Out-of-Season Watermelon. These were my contributions to a little pre-Valentine’s Day party Helen threw for the kids in our lives. I also brought that (probably poisoned) hummus and some vegetables. It sat on the counter while the kids decorated valentine bags and gluten free brownies, ate pizza and chocolates, built fairy houses outside and played with bubbles. Then we drove home and I ate some of it for a snack and the rest, as they say, is history!

I hope you have a wonderful Valentine’s Day! I’m making steaks for Andy and George and what else but risotto for Henry, with a super 80’s couer a la creme for dessert. We’ll talk about that next week! See you then, valentines.

2 thoughts on “Poisoned Hummus, Heart-Shaped Melon, and YES I DID TALK ABOUT THE KIDS’ SWIM CLASSES, MOM”