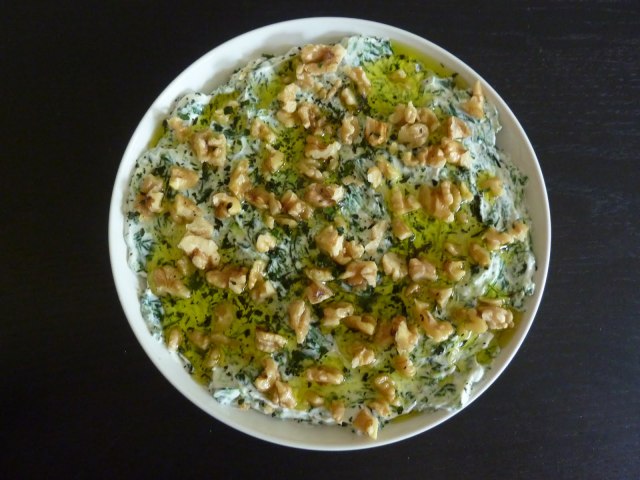 This, dear readers, is one of my very favorite things.  It’s the food52 winner for Your Best Spinach Recipe, and it is the most delicious spinach dip ever.  If it were humanly possible I would swallow the whole bowl like a snake ingesting an egg.
This dip tastes completely different than the traditional mayonnaise-based spinach dip. It’s much lighter and fresher tasting, due to the greek yogurt and fresh spinach (hot tip: I’ve also made this with chard, when that’s available, and it’s equally delicious).  You’ll notice that I’ve successfully drowned out this dips healthier profile with a slick pool of olive oil.  I blame Andy for this one- the guy loves olive oil.  Feel free to be more judicious in your drizzling 🙂
I always serve this dip with homemade pita chips (recipe follows).  These are super simple, and way better than the store-bought variety, but the success is contingent on your starting with good fresh pita bread.  Austinites- I use the small rounds of Phoenicia white pita, which is available at good ole Central Market.
Greek Yogurt Spinach Dip
Adapted very slightly from Shayma’s recipe from Food52

Hi, friends! Don’t you just want to stick your face into this bowl of guacamole? No? Just me? Well, it really is delicious… Andy and I had this for dinner tonight along with grilled skirt steak fajitas and deep fried plantains with crema (!) It was a happy night in the ole Arizpe household. Side note- why was this the first time I’ve fried plantains? They are so, so tasty.

When I was growing up my mom would occasionally make guacamole with one of those seasoning packets they stock in the produce section next to the avocados, and oh man! We would go wild for it! Not to knock the seasoning packet, but this guacamole is so much better.  It’s loosely adapted from Rick Bayless, with way more lime and no tomatoes.  If you don’t have a go-to guacamole recipe, I humbly present this for your approval:

Also, just for fun, here’s the cast of characters and (bonus!) a hot little pic for you meat lovers: 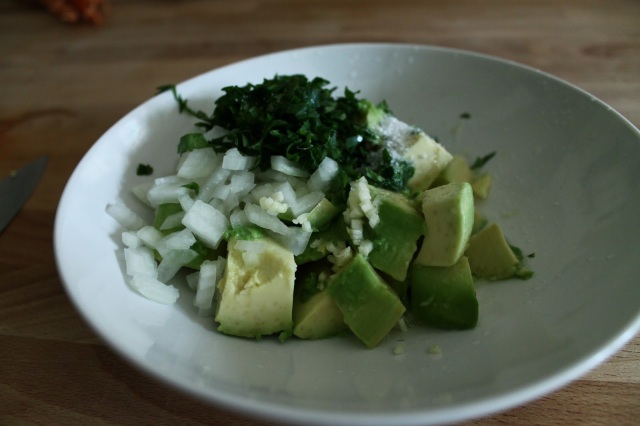 In case you were wondering, this is just a piece of skirt steak, seasoned with kosher salt and pepper, and grilled until nicely charred over a charcoal fire. 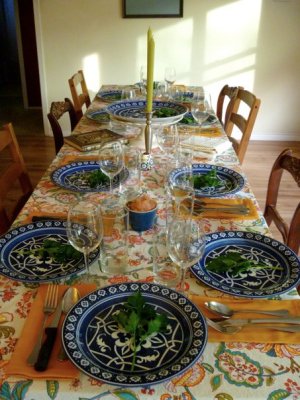 Oh man, oh man.  April is busy.  I would like to sit down and not move for six hours. I really like sitting.

Feast your eyes on our Passover table! We celebrated late, but had an absolutely wonderful Seder.  I was particularly pleased with how my brisket turned out (braised with rhubarb and honey from the All About Braising cookbook).  I’ll share that recipe with you guys later because it’s feeling more and more summery here, and you’re probably not in the mood to braise five pounds of beef for three-and-a-half hours.

Oh, and latkes! I hope you’ve all had them- they are one of life’s great pleasure.  Light and crispy potato and onion pancakes- what’s not to love?  Here’s a picture of some of the 48 (!) I made for Passover:

The key to a really crispy latke is to squeeze the water out of the grated potato and onions really thoroughly.  Oh! Oh! And when you serve them, you have to have little bowls of sour cream along with the applesauce.  It is impossible to eat latkes without both applesauce and sour cream.  Trust me on this one.

Do ahead: Latkes are a do-ahead-er’s dream. You can also keep latkes warm in the oven for an hour or more, if you’re waiting for stragglers to arrive. Cooked, they keep well in the fridge for a day or two, or in the freezer, well wrapped, for up to two weeks. Reheat them in a single layer on a cookie sheet in a 400 degree oven until they’re crisp again. Bonus: If you undercooked them a bit or didn’t get the browning on them you’d hoped for, you can compensate for this in the oven.