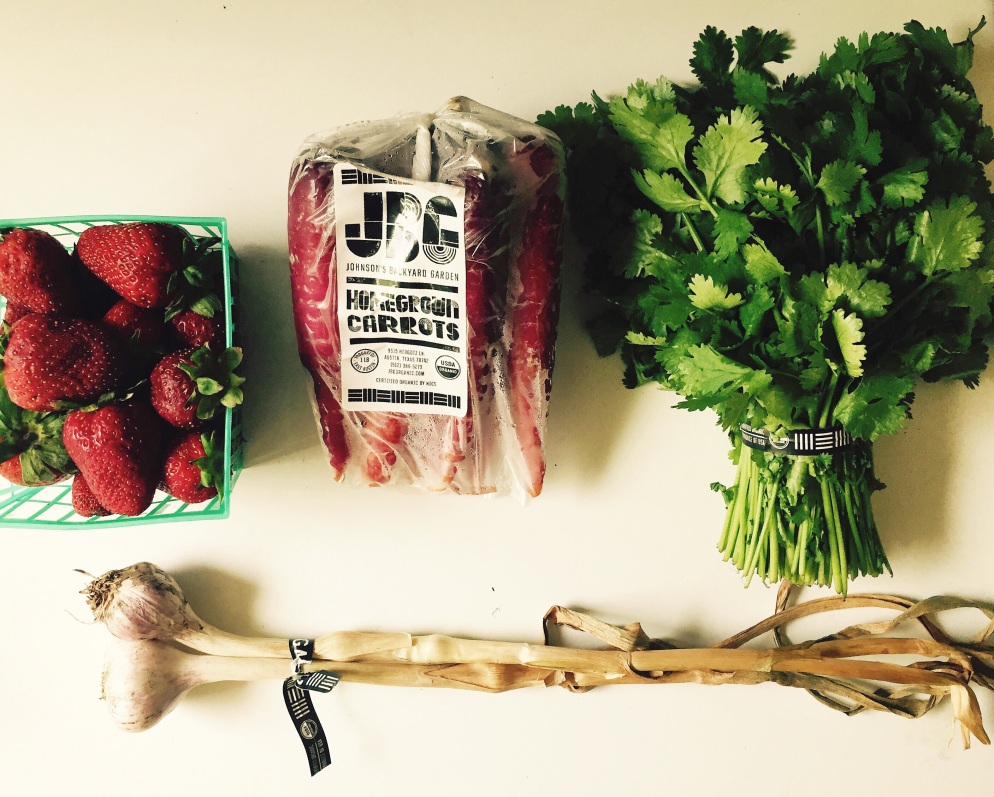 Every few weeks I try to shop minimally and instead eat down food from the freezer and pantry. Can you tell this was that week? It made for a sad farmers’ market haul pic. I had half a pound of ground pork, a pound of Mexican chorizo, and about a half a pound of bacon ends in the freezer, and dried beans in the pantry that formed the foundation for our dinners this week.  I didn’t realize until I started typing this up that I used very few recipes this week- it was a busy one, so I tend to fly by the seat of my pants more than in quiet structured weeks. 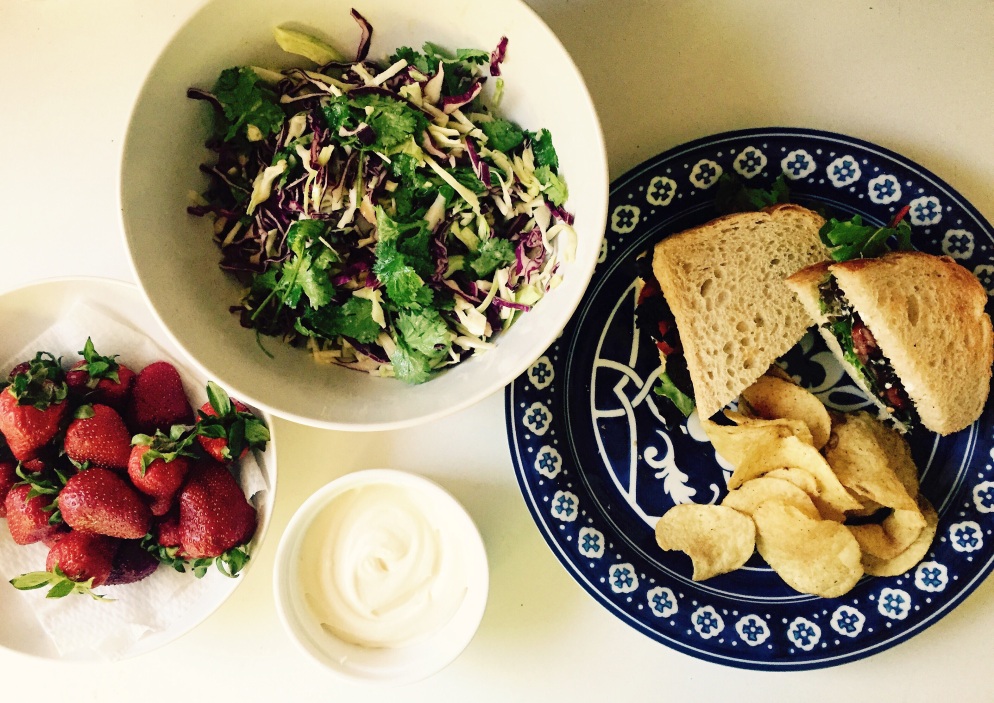 BLT, Miso Sesame Slaw, Strawberries and Leftover Cream Cheese Frosting. The first BLT of the season always makes me really happy. I had leftover red cabbage sliced up and mixed with cilantro from last weeks fish taco dinner, plus another head of green cabbage that I had bought with the intention of cooking for our Norweigan dinner and then forgot. So I sliced that thinly and added a bit to the purple cabbage and cilantro and made a sort of dressing by whisking together miso paste (shiro), sesame oil, rice wine vinegar, and a pinch of sugar. If I had had sesame seeds I’d have toasted those and added them, but I didn’t so that was it. It was a good slaw, I think! But I served it with pepperoncini kettle chips and these two things together were too vinegar-y and weird. 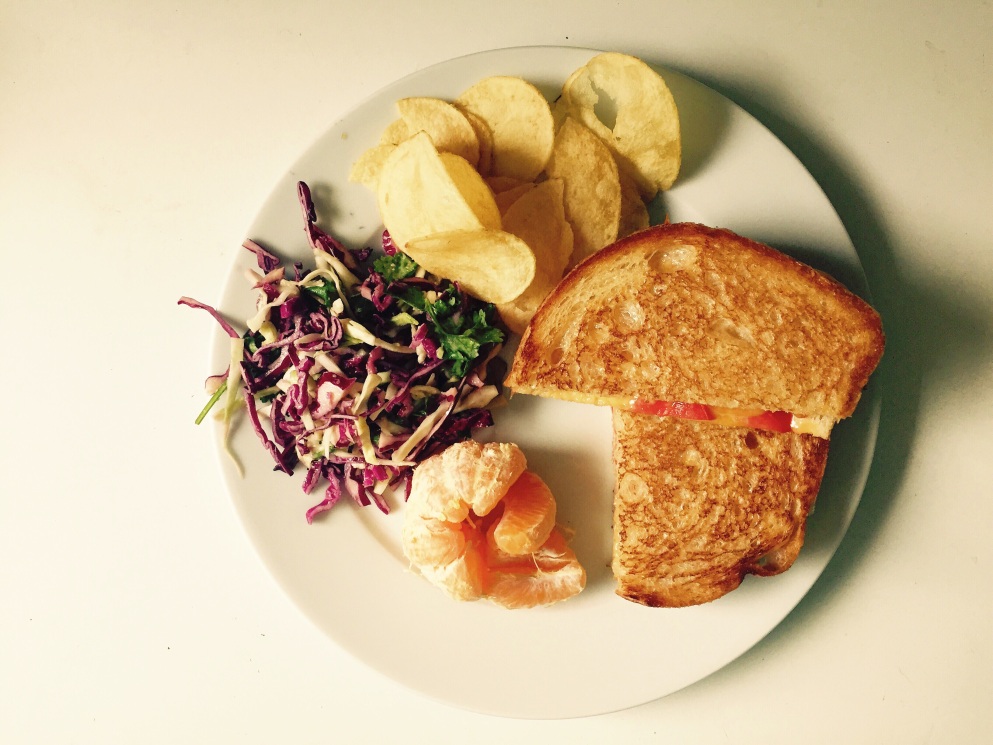 Grilled Cheese and Tomato Sandwiches. More Slaw. Yeah, another sandwich. I’m not sure why I bothered photographing it, but I did, so here you go. This wasn’t a planned dinner, but it got to be six o’clock and I hadn’t done any of the legwork I needed for the scripted meals (defrost meat, cook beans), so grilled cheese to the rescue. I had extra tomato from our BLTs so I added it to our sandwiches. More of that slaw- leftovers of leftovers of leftovers. Please keep reading, I promise we didn’t eat sandwiches all week. O_0

Sweet Potato and Bean Tostadas, Sopapillas. I didn’t soak the beans overnight, but they  cook up tender and more flavorful when cooked without soaking.  These pinto beans were put in a big pot and covered with about two inches of water. I always throw in three peeled garlic cloves, a bay leaf, and as much salt as you would use for pasta water. Bring that to a boil and then cover and transfer to a 300 degree oven. My beans were done (and are done consistently without soaking) after four hours. In the last two hours of cooking I tossed a sweet potato into the oven. By the time the beans were done, the sweet potato was soft and roasty. I put a 1/2 inch of canola oil in the cast iron skillet on medium heat and fried corn tortillas one at a time until brown and crispy. I mashed the sweet potato and spread that on top of the crispy tostadas, and then topped it with beans, cotija, shredded cabbage, cilantro, avocado, and lime.

If you’ve fried corn tortillas and also have flour tortillas in the house, do yourself a favor and throw one of those in the oil while it’s still hot. It puffs up beautifully, and then you can sprinkle it with cinnamon sugar and drizzle it with honey and it is a thing not entirely unlike sopapillas. Fried and sugary works for me.

Migas and Beans for Breakfast. I had a few tostada shells left over from dinner, so I crumbled them up and stirred them into some slowly cooking scrambled eggs along with cheddar cheese and a couple spoonfuls of salsa. With beans and more cotija it made a delicious breakfast. 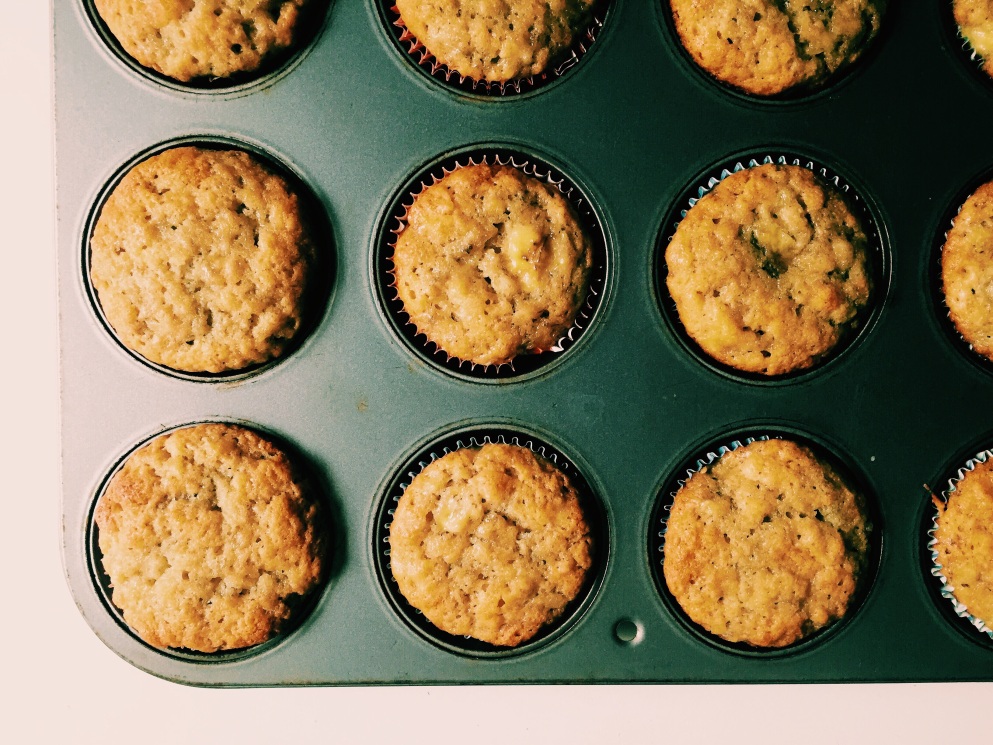 Banana Bread Muffins. I don’t include the espresso in the linked recipe, though I’m sure it’d be delicious, because Henry and George already go to sleep round about 10-11 at night and there’s no way I’m adding caffeine to the mix of our dysfunctional bed time. This banana bread is my all time favorite. I think it’s essentially Joanne Chang’s (of Flour bakery fame), but I got to it through fiveandspice. I think it’s the little bit of sour cream in the batter that makes the difference. Also the coconut oil. One or the other keeps these moist and lovely. Do people still hate the word moist? Even when applied to muffins? Is muffin also a term for vagina and I’ve gone down a crazy double entendre hole? Hole? I can’t stop myself. 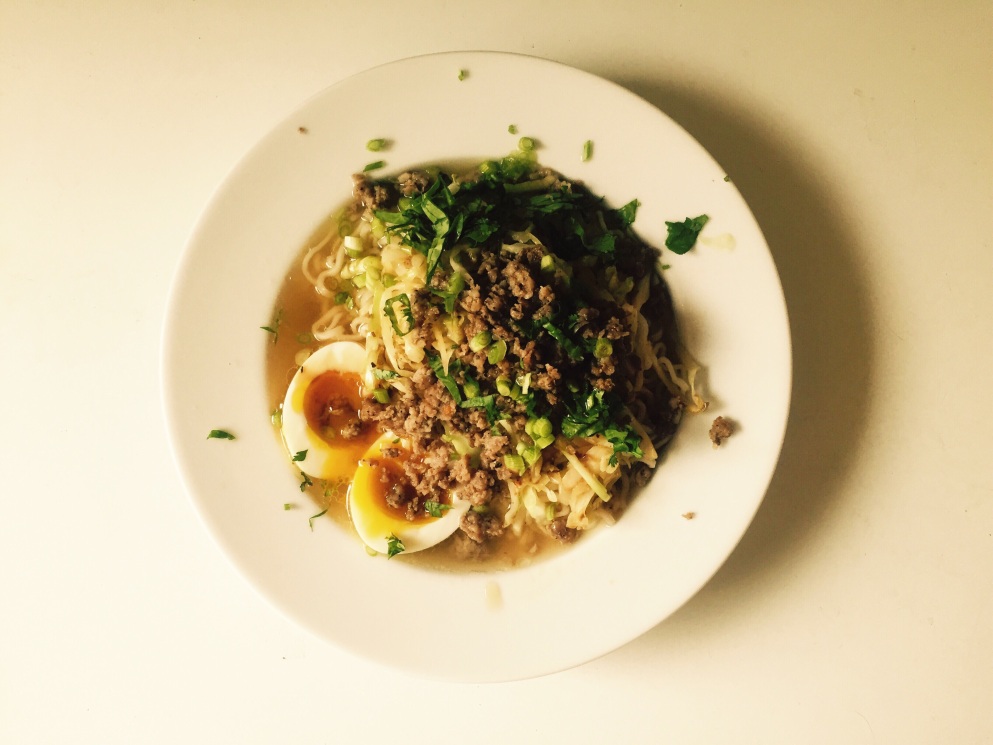 Ground Pork and Cabbage Ramen with Soft Boiled Egg. I linked to the noodle soup recipe not because I followed it, but because it inspired this dinner.  I followed steps 9-14 in the ‘finishing the soup’ section- brown ground pork, brown the cabbage (leftover from tostada toppings) in the pork fat, serve on noodles (ramen in my case- Wheatsville sells an organic heirloom wheat variety. Let me know if you find a more hipster food item than organic heirloom wheat ramen noodles, cuz I’m definitely going to want that)  top with cilantro, scallions, and sesame oil. That noodle soup looks completely gorgeous, but it takes three days and I just did not have my shit together enough for it this week. Nevertheless, I had stock, miso, cabbage, and ground pork, and the resulting ramen-like thing was so good and took about half an hour. I am obsessed with the Japanese marinated soft boiled eggs for ramen, but again, didn’t plan ahead today and so just did the soft boil without the marinating for this dinner. It was still sublime.

Chorizo and Monterrey Jack Quesadillas, Beans, Guacamole. Crisp up some Mexican chorizo (Richardson farms sells a perfect not-spicy version). Put a tablespoon or two into a corn tortilla along with a little shredded cheese. Add a splash more oil to the chorizo pan and crisp the quesadillas in it and sprinkle with salt. Your house will smell amazing and you’ll have crispy, greasy, meaty quesadillas. Also guacamole, which I think I already wrote about. But I mash avocados with lots of lime juice and a bit of kosher salt. Add very finely minced garlic and onion (not a lot) and cilantro.

2 thoughts on “Beans and Sandwiches”