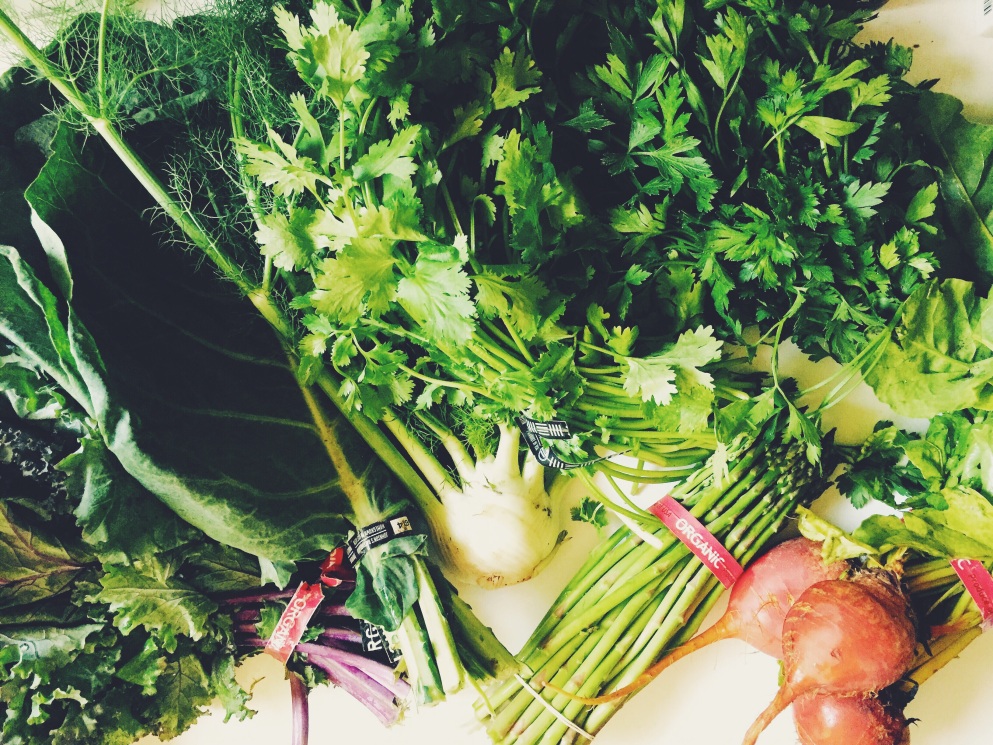 I bought a whole chicken and ground chicken this week too, but there wasn’t room for them in the shot. They were crowded out by the beets that I roasted and then turned off the oven and left there for 10 hours (so I didn’t eat them- was that the right call?) and the collard greens that are still in my fridge and will, regrettably, likely end up in the compost pile. Let’s see! Here’s what we did eat. 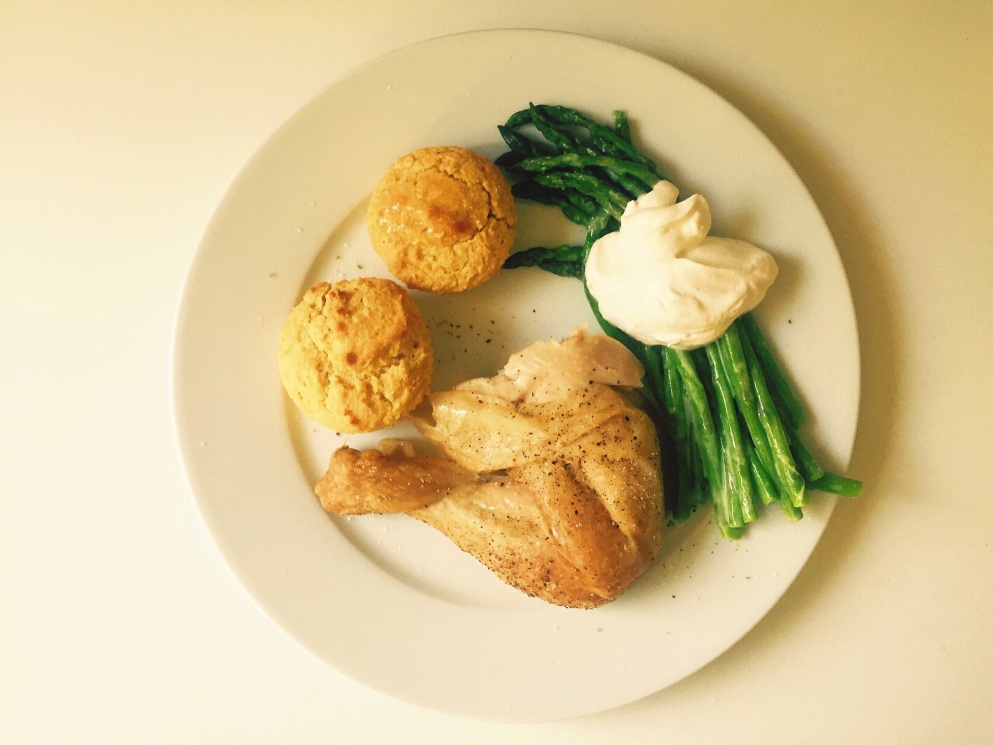 Roasted Chicken, Asparagus with Salt and Pepper Whipped Cream, Corn Muffins. Poor predictable Saturday roast chicken. It’s the usual kind. You can read about it on literally any of my other posts if you’re so moved. But look- something crazy! It’s a food52 genius recipe for asparagus with savory whipped cream. We all thought it was interesting but ultimately, weird. The cream on top is too rich. I know I put a big dollop on there, but even the spears with just a tad felt like too much. Also, the whipped cream is cold, which feels jarring with the hot asparagus. I won’t make it again, but it was fun to try something new. The corn muffins are leftover from a few weeks ago. I just popped the frozen muffins into the still-warm oven while the chicken was resting and then put unseemly butter pats on top (not pictured, too incriminating).

Crispy Coconut Kale, Ridiculously Easy Macaroni and Cheese. In addition to near-weekly roast chicken, I make a lot of mac and cheese. The boys love it and I feel guilty for forcing them to eat so many weird dinners throughout the week, so I usually throw them a mac and cheese bone. This recipe is the one I always go for when the stars align and we have American cheese in the house (a rare treat for Andy!). It is ridiculously easy and delicious. I use more cream than the recipe calls for. This kale is fantastic- I piled mine right on top of the mac and cheese. It’s chopped and tossed with a coconut oil/tamari/sriracha/sesame oil dressing and roasted, then drizzled with a bit more of the dressing. The roasting does wonders for kale- half the pan ends up tender and soft and half of it ends up deliciously crunchy like kale chips. Henry will eat the crispy bits but not the soft ones. 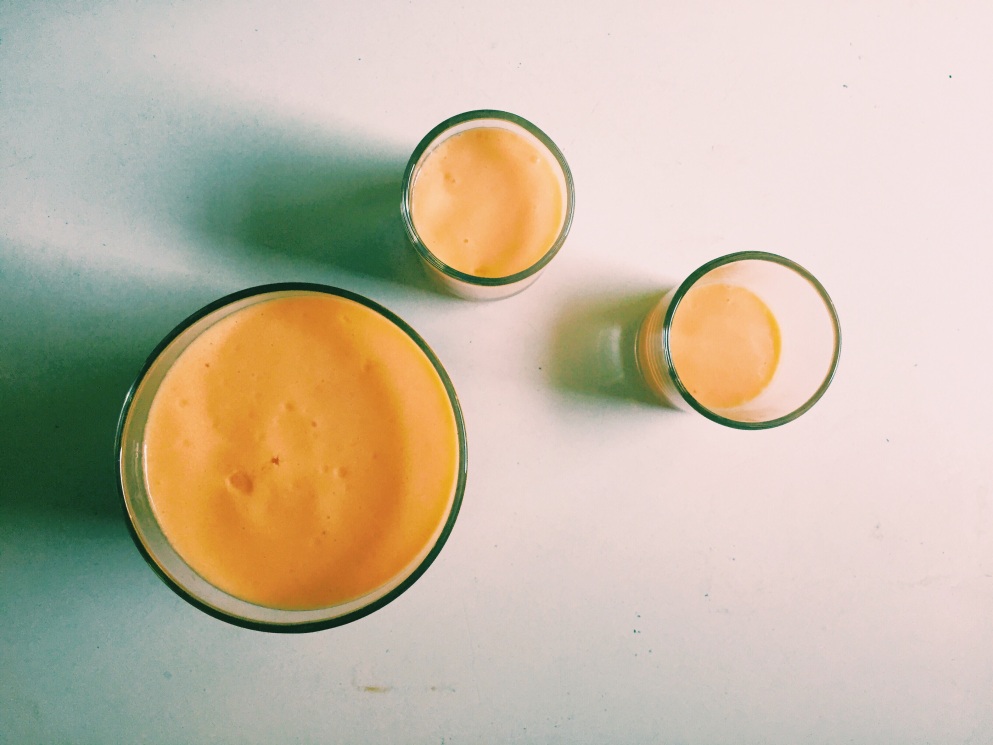 Mango Lassis. I’ve been making one of these for Henry on the daily. Henry loves mangos. Cute story- a year ago, as Henry was falling asleep he said “I’m so excited it’s mango season.” And then this year, the same thing happened! Except he said “I’m so fucking excited it’s mango season.” I really really have to cool it on the language. Anyway, the big glass is for Henry, the small glass is for me, and the tiny small glass is for George, who won’t touch the stuff but I’m hoping if I keep serving it to him one day he will. The kid runs exclusively on breast milk and pretzel rods.

I make mango lassis by peeling an ataulfo mango, cutting all the flesh off the pit and adding it to a blender with a couple big spoonfuls of full fat yogurt, a splash of milk, and a small squeeze of honey. Blend till smooth and that’s it y’all. 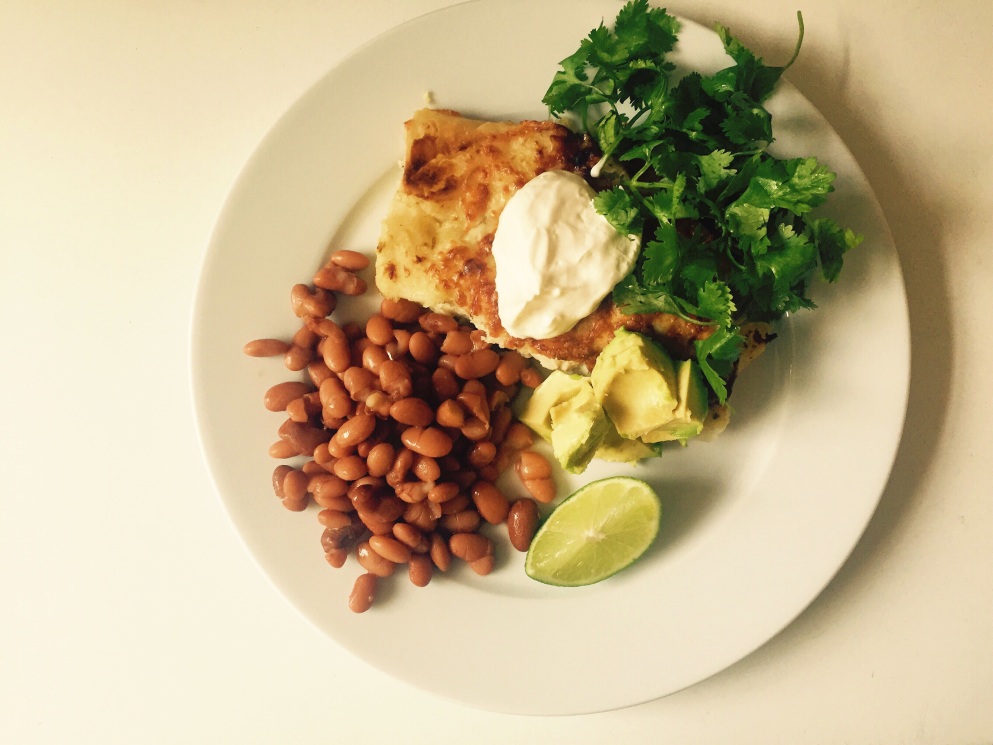 Chicken Enchiladas Suizas, Beans, Avocado. I don’t really use a recipe for enchiladas, but what I do is similar to the one I linked to. Instead of dipping the tortillas in salsa to soften them like the recipe calls for, I fry them one at a time, super quickly (like a second or two per side). Then I just put some of the green sauce in the bottom of the baking dish, roll the enchiladas and nestle them in the pan, and then pour more sauce on top. Frying the tortillas is always a good move. I filled mine with shredded chicken leftover from Saturday’s dinner, grated monterrey jack, and a little bit of grated raw onion. Served with sour cream and a mountain of cilantro and avocado. 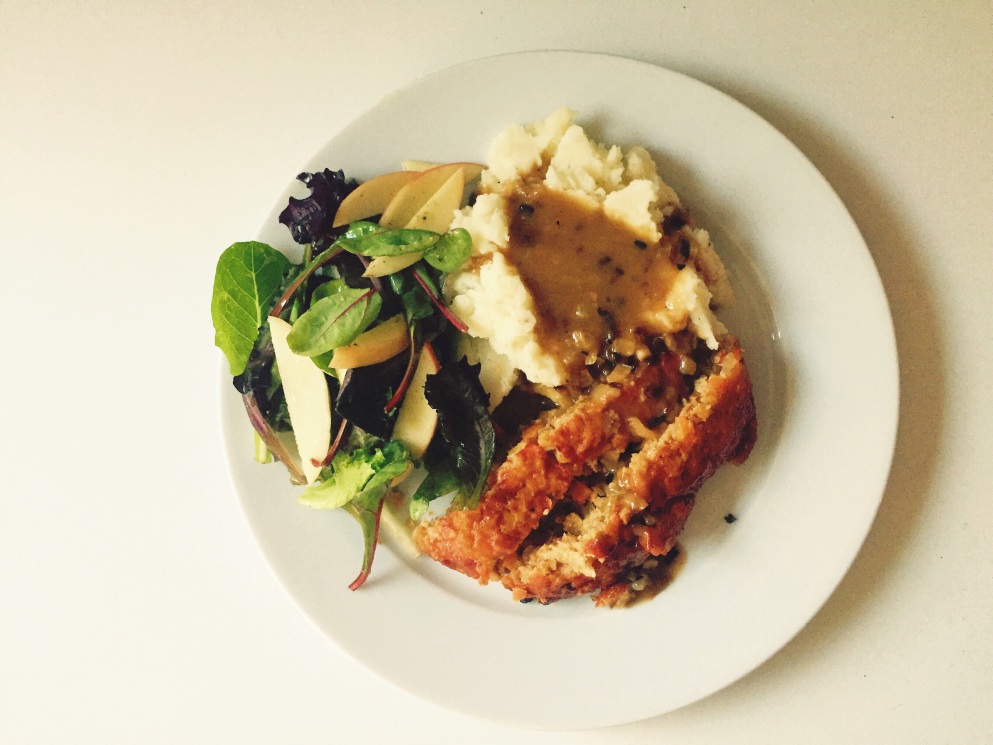 Cumin-Scented Chicken Meatloaf, Mashed Potatoes, Apple Salad. I can’t type meatloaf without first typing meatload. Every damn time. And hell if that doesn’t sound horrible. I blogged about this meatloaf (I typed meatload again) back on ye olde blogger site, but I didn’t share the recipe in a move that was designed to try to get you to buy Jennie’s very fun cookbook. (She’s a former boss/friend of my sister). But let’s be real- my only readers are my facebook friends (hello!) and I’m not going to be able to help her sell cookbooks. So I’m gonna type up this recipe for y’all because it’s nowhere on the internet and it is spectacular.  It’s made with a pound of ground turkey (I use ground chicken because it’s $2 cheaper at the farmers’ market and just as good) and is leaps and bounds better than the standard meatloadddd. It’s got oats in it! Jennie calls for quick cooking oats but I use the old fashioned rolled oats cuz that’s what I keep in the house and it works great. The oats, as Jennie says, give this meatloaf an almost creamy texture. The tiny bits of sauteed carrot and celery add a little crunch, the addition of cumin is perfect, and I just love everything about it.

Recipe follows! Join me next week as I cook a weeks worth of dinners from food leftover from my sister’s bachelorette party. True story. I made way too much food.

Preheat oven to 350 degrees. In a medium saute pan, heat olive oil and saute celery, 1/2 onion, carrots, and garlic until soft and slightly browned, about 10 minutes. Set aside to cool.

Meanwhile, in a large bowl combine turkey, salt, pepper, cayenne, cumin, egg, ketchup, milk, breadcrumbs, and oats and mix well.  Add the cooled mirepoix and mix again. Form into 1 or 2 free-form meatloaves on a sheet pan. Alternatively, smash flat in a 9″ x 9″ pan, like a pan of brownies. Cover with foil and bake for 30 minutes. Remove foil. Brush a thin coat of ketchup on top of the meat and garnish with a few raw onion slices. Return to the oven and bake until brown, another 30-45 minutes. An internal meat thermometer should reach 160 degrees in the very center of the loaf. Serve with Creamy Gravy.

In a medium saute pan, heat oil on medium heat and saute onion until slightly brown, about 8 minutes. Reduce heat to medium low, add flour, and cook, stirring, to brown the flour, an additional 1-2 minutes. Slowly whisk in stock and allow gravy to come to a boil, stirring constantly. Add milk and reduce heat to a simmer. Taste and season with kosher salt depending on how salty your stock is. Serve with meatloaf.

10 thoughts on “Loads of Meat. Not really. Just one MeatLoad. Enchiladas, Lassis.”