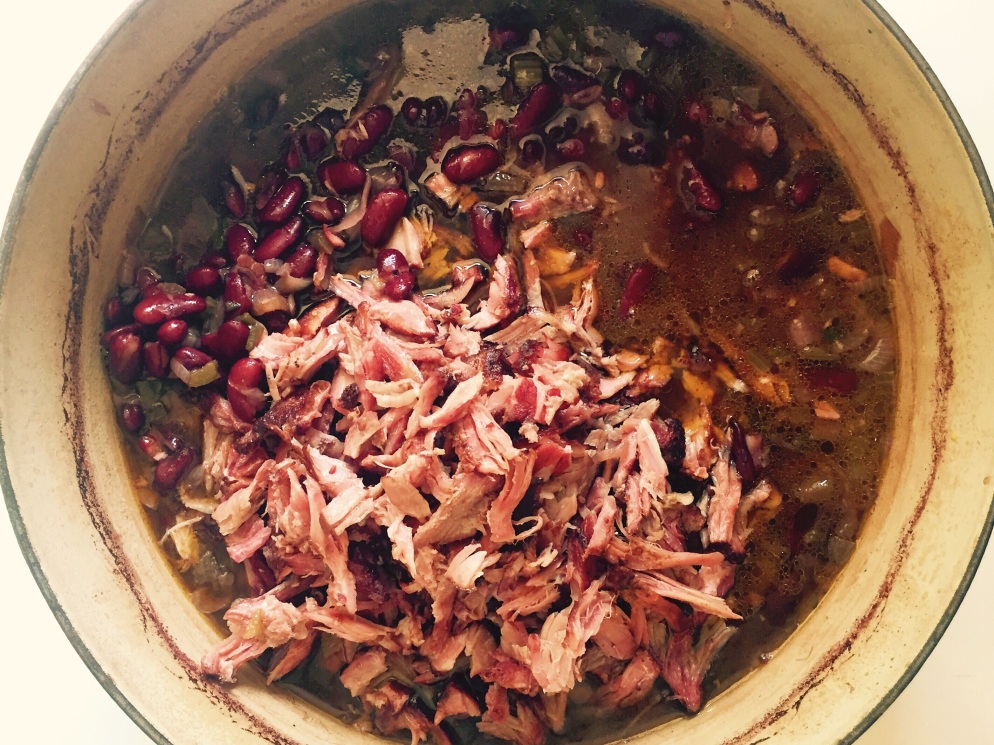 This week, you guys. I’d envisioned it to be a sort of resting period following the chaos and house guests and so much family togetherness leading up to my sister’s wedding last week. But the kids caught some crazy bug that features a hacking smoker’s cough and just completely shitty attitudes. And they need constant intervention, lest one hit the other square in the face with a block for some minor injustice. And I just feel tired. Is this some Mercury retrograde shit? Is that even a thing? Everything feels harder this week. I’m a sad sack.  Imma try to pull myself together long enough to get to the end of this blog post, yes I am, yes I am.

My sister’s new father-in-law came to town the day before the wedding and stayed up all night making phenomenally good barbecue for the wedding day feast. Basically everything he made got eaten, but he surprised us at the end with a bonus rack of ribs and a whole brisket. Which is, for a family of four, and really only two meat eaters, a lot of meat. So for the next three meals after the wedding we ate beans and barbecue. The meat was getting on in age, and I didn’t think I could just freeze it (can you do that?) so, I made a huge, and ridiculously meaty batch of red beans, and instead of ham hocks, I tucked 10 pork ribs into the simmering beans. When the beans were done, I took the ribs out to cool, and then shredded the meat off the bones (so easy to do after the long cook time) and added it back to the pot. It tastes incredible, but I put the whole batch into the freezer to save for a week or two from now when we’re ready to eat a huge pile of meat again. 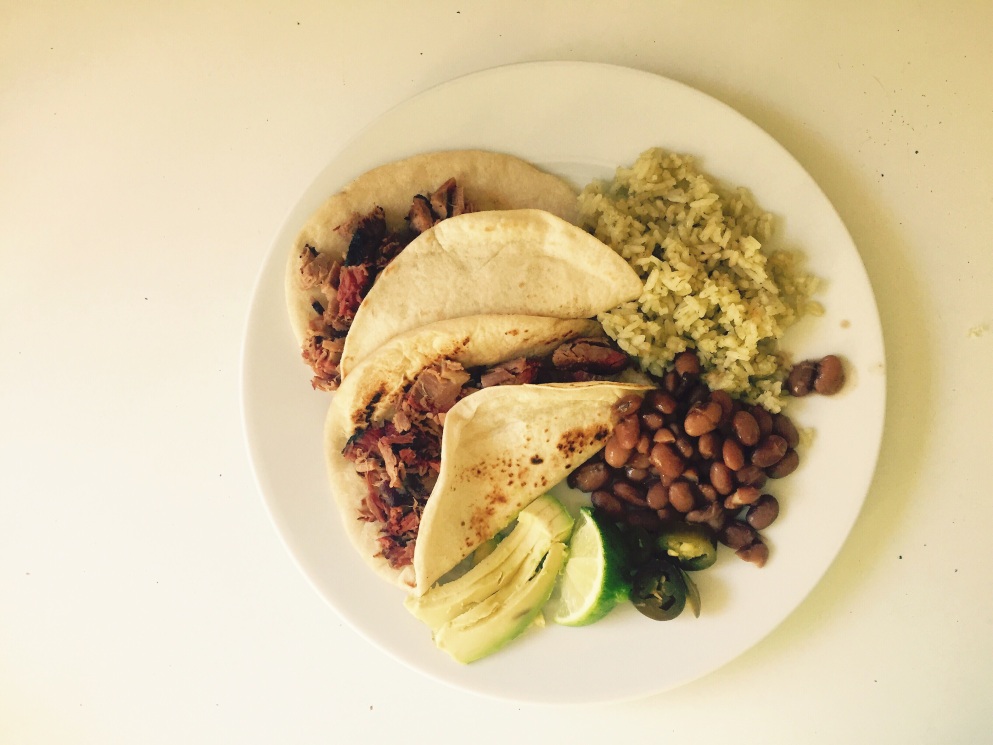 Brisket Tacos with Beans and Green Rice. That rice recipe is the best red rice recipe I’ve ever used. And you can totally cheat, and instead of making your own salsa, blend up a jar of your favorite salsa until it’s smooth, then add enough water to the pureed sauce to equal 4 1/2 cups, and then strain that into the browned rice. I had a ton of leftover green salsa to use up after a meal of rehearsal dinner day breakfast tacos, so green rice it was. Shredded barbecue brisket in a plain flour tortilla with nothing else makes a damn fine taco.

Since I’m in an ornery mood, I’m going to tell you a few food blogging things I hate. I hate when people tie up tacos with string to take a picture of them. Have you seen this? They do it so the tacos stand up for a pretty picture, but it’s so dumb to me. Who wants to untie baker’s twine from a big meaty tacos before they eat it? My biggest food blog pet peeve though is when the blogger makes a delicious homemade ice cream and then painstakingly makes perfectly rounded scoops and proceeds to dump them unceremoniously on the counter for a picture.  How do you not feel like an asshole serving your counter three perfect scoops of ice cream? Do you scoop it back into a dish, all melty and sad, and eat it later? (Ice cream mistreatment aside, I really love Joy the Baker!)

Blueberry Pancakes Again, with a Blackberry Sauce and Sausages. A dinner for Henry. There were inexplicably no blueberries at the market, so I used blackberries for our homemade berry syrup. It wasn’t as good as the blueberry sauce from a couple weeks ago- the blueberries must have more pectin or something, because that sauce was thick and gummy (in a good way), and this one was good-tasting but thin.

Pesto Pasta Salad with Caramelized Onions, Slow Roasted Tomatoes, Corn, and Grapes. Another meal to use up leftovers- this time the huge pile of sliced white onions leftover from the wedding barbecue, and a couple of pints of grape tomatoes that weren’t used for the wedding salad. I slowly caramelized the onions in a bit of olive oil and butter, and tossed them into a mix of tortellini and fusilli with the roasted tomatoes and basil pesto. Henry usually loves this, but I served it alongside the first corn of the season, and he ate 5 out of the 8 ears I made and nothing else. 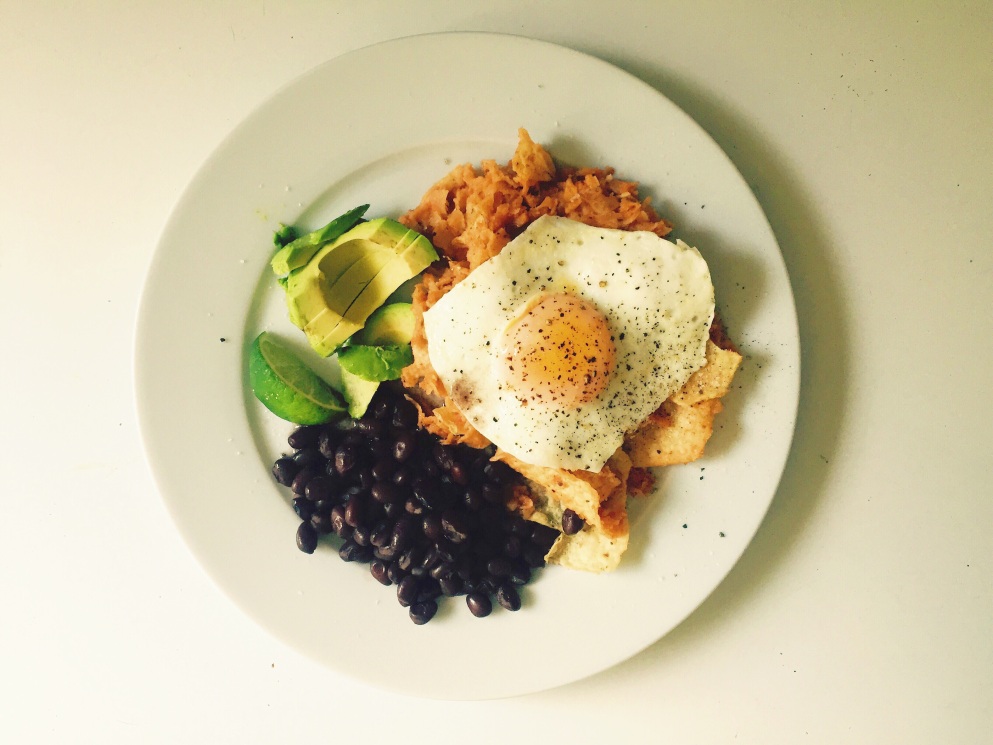 Chilaquiles with Fried Egg, Beans, and Avocado. Chilaquiles are a great, kid-pleasing, supremely easy dinner. The linked recipe is a favorite, but I made a fake version of it with 1 1/2 cups pureed jarred salsa (we had still more leftover from the wedding) mixed with water. You heat that mixture to a simmer and then quickly fold in a ton of tortilla chips. Topped with a fried egg, or avocado, or sour cream it’s the best way I know of to turn stale chips and old salsa into dinner.

Okonomiyaki with Lime Ginger Yogurt. Like the chilaquiles, this is one of my go-to easy weeknight dinners when I don’t have the time or energy to cook. Mix shredded cabbage, sliced scallions, bread crumbs, and eggs, and fry them up in oil. You can serve these with mayonnaise mixed with sriracha and honey, but I like to dip them in yogurt instead. This one had lime zest and juice and grated ginger mixed in.

And that’s the week! I gotta go cuz my kids are screaming. Tonight we have friends coming over for dinner and I’m making a thai grilled chicken and coconut soup that I’m excited about, so hopefully I’ll be out of my funk in time for next week’s post