Henry made me a card for my birthday. On the outside he painted eight roses in “all the prettiest colors.” On the inside he wrote, “Dear Mama I hope you’re happy for a whole year” with four hearts and a black rectangle. What’s the black rectangle? It’s my phone, because I love it.

Last week I shared my snotty comments about the parents at Henry’s parkour class who look at their phones instead of stopping their kids from knifing toddlers. But I look at my phone a lot too. Not while we’re out, which is why I guess I feel entitled to judge these other parents, but it’s always by my side in case there’s a minute of downtime when I’m at home with the kids. Henry’s including my phone in a birthday card as the thing I love most gave me pause, but didn’t change my habits one bit. But last week was rough- I got less and less sleep each night as George night-nursed furiously because he’s deep in the throes of cutting his back molars, and he’d wake up sobbing whenever I’d try to put a finger in his mouth to break the suction on my boob. And still, every night, no matter how exhausted I felt, I’d look at my phone until after midnight, scrolling mindlessly through facebook and playing candy crush. After doing this on Friday night it occurred to me that I hadn’t gotten anything out of it. So last night, I just went to bed. And it felt good, so I didn’t look at my phone much today either. I’m not saying this because I think I’m hot shit for going 24 hours without looking at facebook, or that it’s wrong for anyone to enjoy themselves by looking at their phones. I’m just sick of mine. I feel like I’m addicted to it, and I don’t want to look at it all the time anymore, so I’m going to try to do other stuff instead. Keep my hands busy with whittling, or sewing, or something else. That’s my plan, anyway. Here’s what we ate this week. 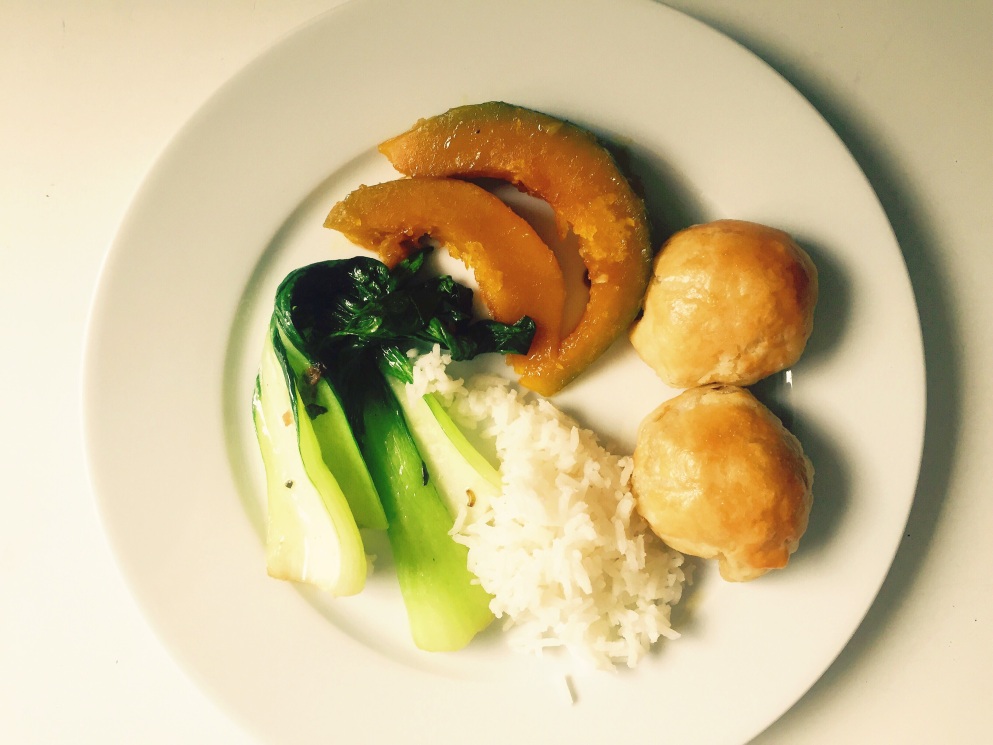 Suzhou Savory Pork Mooncakes, Stir-Fried Bok Choy, Glazed Pumpkin, Rice. Ugh, this dinner. Serious Eats had this post up last week about making a feast to celebrate the Chinese Mid-Autumn Festival and I said yesss. I wanted all those things. The savory mooncakes especially caught my eye- you make a laminated dough by folding a big square of butter into the dough over and over and end up with a flaky pastry that’s not unlike a croissant. Inside is a ginger-y, garlicky pork filling. I had to have them! They were a lot of work though. And I only did a few of the other ideas from the feast post- a simple bok choy, and a sugar-glazed pumpkin that is actually Vietnamese, but I wanted it so I made it. But they added to the work. And then I thought I’d be nice to Henry and make a little pot of rice too, because it is his second favorite food (behind risotto and ahead of chickpeas) and I try not to make it very much anymore because of the arsenic and blah blah blah. But then he only ate the rice- he wouldn’t touch the mooncakes or the vegetables. George either, but that was less surprising. I felt mad at Henry for not experiencing the Chinese Mid-Autumn Festival Feast I had prepared and mad at myself for feeling like he has to care about a weird culinary indulgence I had decided to spend hours cooking. Everything was delicious though. We had a ton of the mooncakes left over so I ate two for breakfast the next several mornings, and I decided that the only thing better than sharing mooncakes with my children is eating all the mooncakes myself.

Chicken Meatloaf, Mashed Potatoes, Roasted Broccoli. My sister was hoping for a round two with my nemesis from last week, but this meatloaf got in the way. I had to get home right after Henry’s parkour class to get it in the oven, so we went to the free play room early, and NO ONE WAS THERE. It was glorious. I am an anti-social monster. But we had the place to ourselves and they played gangnam style and single ladies and love is an open door and call me maybe over the sound system and I got to sing badly in a big room while the kids played on whatever they wanted and I loved it. I’m sure I don’t need to tell you that this dinner is a home run. Ketchup-glazed meatloaf, mashed potatoes, gravy. The only possible weak spot is the broccoli, but I over-salted it so badly that it was rendered inedible, so everyone was free to ignore it.

Flour Tortillas. I took a picture of these to show you that I made them again. Making your own tortillas feels a little like printing your own money. Plus, you get to mix oil into flour, which is how you make cloud dough, and is therefore demonstrably enjoyable to squeeze in your hot little hands. They taste a little like crackers though, so something’s weird there. I think they need more salt? That’s my solution to everything.

Sausage, Egg, and Cheese Breakfast Tacos. No wait, breakfast tacos are my solution to everything. Or at least to what should we eat for dinner with no time and no special ingredients. 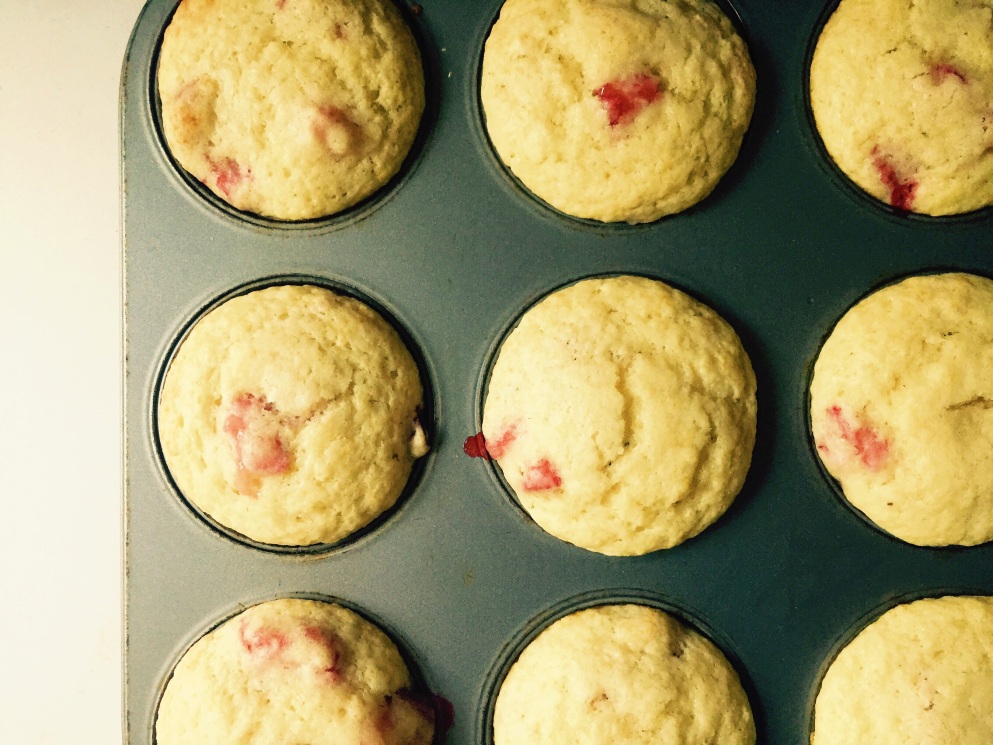 King Arthur Basic Muffins, Berry Variation. This is a good-hearted little muffin. It’s made from pantry staples- you don’t need anything. You can make them without anything mixed in, or you can finely chop literally any fruit and mix it in. They are moist and tender and just exactly what you would want and expect from a muffin, and there are some fine tips in the recipe to apply to other muffins. Like starting them in a 500 degree oven and then immediately dropping the temperature 100 degrees, because that’s how you get appealingly round muffin tops! Who knew? Mrs. Larkin, did! Thank you for lighting my path on the way to the muffin promised land! 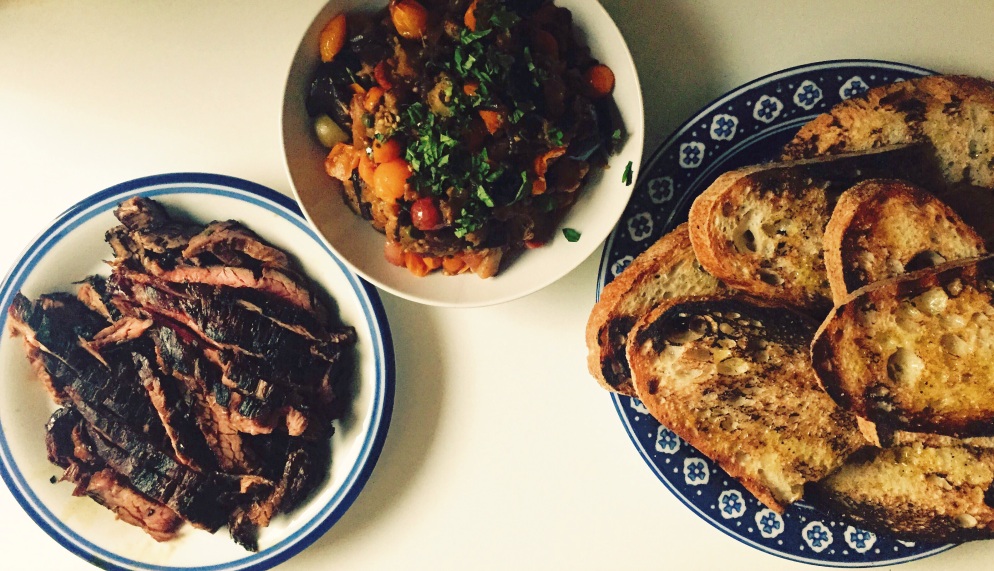 Honey-Tamari Grilled Skirt Steak, Caponata, Bruschetta. My friend Christy makes a honey flank steak once a week by marinating the meat in a heavy drizzle of honey, liquid aminos, and chopped ginger overnight. I thought it sounded fabulous and I wanted to try it. But then I forgot to marinate it overnight, and only did it for a few hours, while the meat was defrosting too, so it didn’t end up tasting like much of anything, except grilled meat, which sure isn’t bad but was not what I wanted so I didn’t like it. Andy was happy to eat mine! I bought the eggplant for the caponata two weeks ago, and kept putting off making it, I don’t know why. I expected the eggplant to look terrifying when I pulled it out of the crisper, and then I’d have an excuse for not making it, but it looked just dandy, with cheerfully-taut skin and no blemishes. So I made the caponata and nobody wanted it. Henry because he was sick and didn’t want to eat anything. George because he never eats anything. Andy because it had green olives and capers, his only real food dislikes, and me, because I felt overwhelmed with the prospect of being the only one to have to eat this whole dish by myself. I never did. I threw it in the compost a few days later. I ate grilled bread for dinner. And then Andy went to Sonic to get Henry some french fries because that’s what he said he wanted since he wasn’t feeling well, and then Henry didn’t touch them, so I ate those too.

Pan Fried White Beans with Kale, Roasted Butterkin Squash, Leftover Bruschetta. This bean and kale thing is supposed to be made with big giant white beans, like gigante beans, but Wheatsville didn’t have anything like that, canned or dry, so I just used cannelini. They turned to mush in the frying stage but this dish still tasted great. What Wheatsville lacked in beans it made up for in novelty squash. They had a stack of butterkins right by the door, which I misread as butternut and pointed them out to Andy to say how crazy they were. He said (reading the sign correctly) that they were butterkins, but it was only when I was cutting the thing open days later that I realized that meant it was half pumpkin and half butternut squash. I was careful to share with you that I had not had a lot of sleep this week, and that my mind has atrophied from too much candy crush, so I have two excuses for not putting this together sooner. The thing is adorable, but otherwise inferior to regular butternut in every way. The stem is tough like a pumpkin and hard to cut through, the ridges make it hard to peel, and it is waterier than a regular butternut so it doesn’t brown as nicely when roasting. To sum up, butterkins can go to hell. 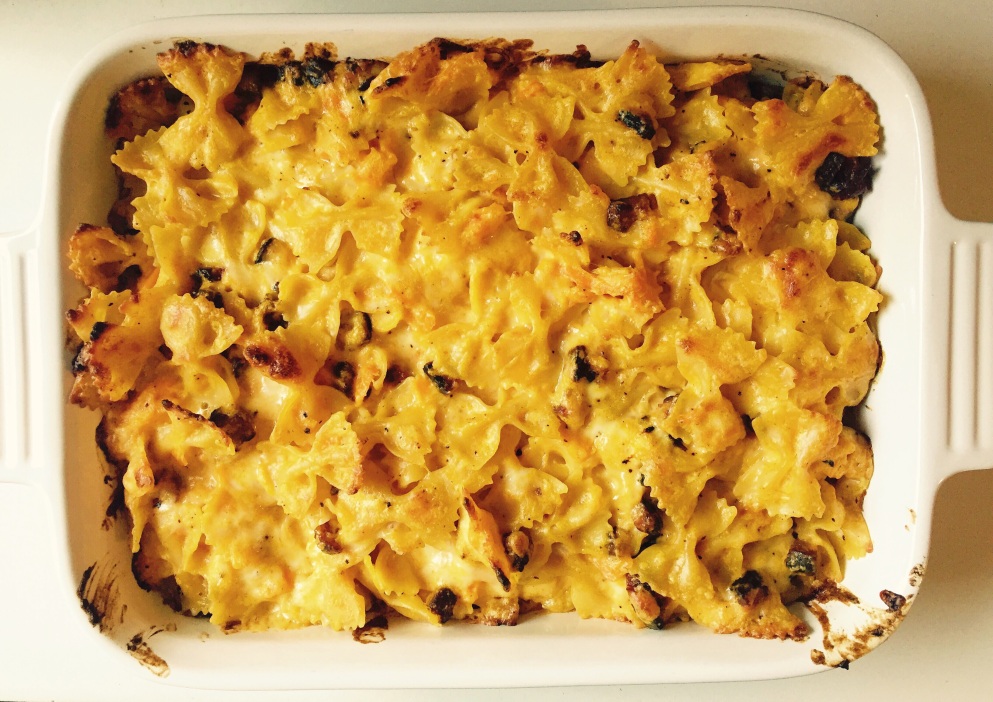 Pumpkin and Pancetta Pasta Al Forno. I had lots of leftover roasted butterkin wedges, and some leftover pumpkin puree too because I made those pumpkin chocolate chip muffins again (I didn’t photograph them out of shame), and some cheese and heavy cream, so I decided to make this mac and cheese. I mashed up the roasted pumpkin and mixed it with the puree and cream and other sauce ingredients. This recipe calls for a billion different types of cheese. I had cheddar, monterrey jack, and parmesan and so used only them, and this made the best version of this dish I’ve cooked so far. It’s obnoxious, isn’t it, when people drone on about all the substitutions they made in a comment on an internet recipe and how it turned out fabulous their way, but I’m going to do it anyway. Don’t let the long list of cheeses stop you from making this perfect dish- use what you’ve got.

It feels like I was really grumpy this week and didn’t like anything. Maybe I was and maybe I didn’t. I’d say that I was going to be loads more cheerful next week, thanks to my newly-found anti-phone zen, but I think I’m getting my period so everything’s going to suck anyway. See you next week!